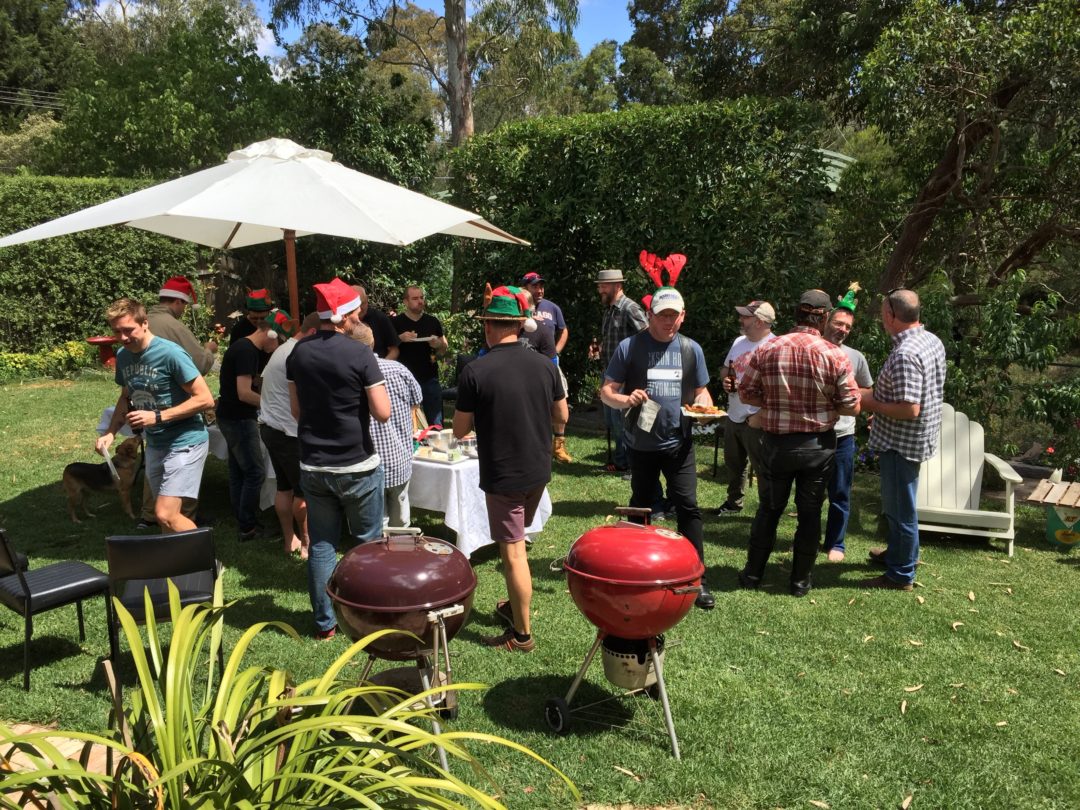 This ride report was published in the Volume 26 No1 January 2016 issue of the Motorcycle Tourers club magazine, ‘Chain Lube’.

The weather was very kind for the Christmas ride in December. Peter Ho led the group from Sth Yarra to the viewing area at Tullamarine airport. Santa, (me dressed in a Santa suit, complete with a toy Black dog cable tied to the back of the BMW) and his elf (Dewy’s nephew, Ryan) were the last riders to turn up at the viewing area. I had briefed my nephew at home about the corner marking rules, and the dos & don’ts of the club ride. Just as we were about to head off for our ride I was asked by a lovely older woman if she could take my photo for her grandson, apparently she was waiting at the airport viewing area for a plane to arrive which was carrying a puppy which she intended on giving to her grandson for xmas, she was going to tell her grandson that I had brought it to her on my bike. Due to Ryan being the only new person to a MMT ride I skipped the formality of going through the remainder of corner marking at the meeting point and we headed off for our ride.

From the viewing area we rode up to Wallan, we turned west at Wallan and headed towards Romsey. As we were leaving Wallan I received a phone call from Adz and organised to meet up with him at Romsey. At Romsey we pulled up on a service road on the main road and waited for our group to all arrive, which seemed to take an unusually long time for the small amount of km’s we’d travelled. Eventually everyone arrived and Michael VD who had volunteered to be tail rider (thanks Scooter).  Apparently, we had a corner marker who had moved from his corner too early which caused a few riders to miss a turn but thankfully our experienced tail rider managed to collect everybody and get everyone back on track. The lesson learned from this incident is to ALWAYS give a POPER ride briefing at the start of EVERY ride to ENSURE everyone is on the same page and to reduce the risk of your ride going wrong.

After Adz finally arrived at Romsey we resumed our ride by heading North through Lancefield to Pyalong. At Pyalong we started heading east to Glenaroua. From there we turned south-ish and made our way to Broadford, where we stopped for a late morning tea break which set my ride timing back 45 minutes, this was because I gave in to the constant grizzling of my riding buddies suffering from coffee withdrawals, (you guys know who you are, lol)

From Broadford we rode out through Tyaak to Strath Creek and Flowerdale. From Flowerdale to Glenburn and down through the Kinglake-ish area to Dixons Creek and eventually into Diamond Creek and finally finishing up at Paul S’ place in Greensborough for our Christmas party where I was eventually able to tag out wrestling style to the other sluttier Santa who managed to grope and make everyone laugh through the whole secret Santa gift giving ceremony.

Thanks to everyone who came on the ride, which was approx. 350kms and never more than 60 minutes from Melbourne at any point. I’ve included the map of the route for anyone else to use as a potential club ride or an impromptu ride if you’re looking for a good ride near-ish to the CBD.

← MMT has a Very Foggy Christmas We ‘Muster’ at Musk Once Again… →
Manage Cookie Consent
To provide the best experiences, we use technologies like cookies to store and/or access device information. Consenting to these technologies will allow us to process data such as browsing behavior or unique IDs on this site. Not consenting or withdrawing consent, may adversely affect certain features and functions.
Manage options Manage services Manage vendors Read more about these purposes
View preferences
{title} {title} {title}