MMT has a Very Foggy Christmas 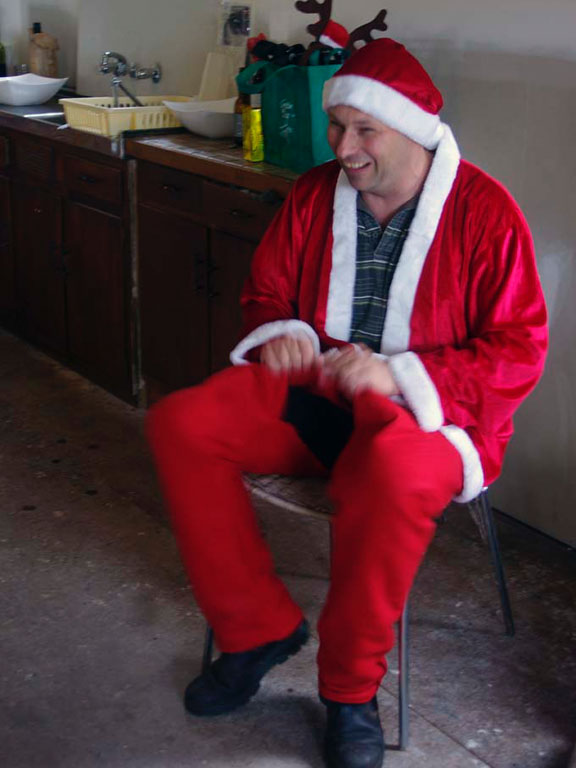 This ride report was originally published in the January 2013 issue of the Motorcycle Tourers club magazine, ‘Chain Lube’.

In the week leading up to the MMT Christmas ride, the weather was perfect motorcycling conditions. The seven day forecast for the Saturday of the ride was looking rather grim, with predicted rain and thunder storms. I wasn’t too concerned at this early stage as the long range forecast is not always accurate. The predicted rain and thunderstorms had not changed, and on the morning of the ride I received a number of calls and texts from members notifying me that they would forgo the ride and take the car to directly Marysville and meet there for the Christmas Party.

When I left North Melbourne the roads were dry, and I decided not to worry about the weather conditions as it would only be a short ride and I’d have a change of clothes at Marysville. On my way to South Yarra I stopped in Kings Way to get fuel. As I entered the servo, the heavens opened and it poured with rain while I was filling my tank. By the time I was ready to head off around the corner to the first pick-up point, the rain had stopped.

I waited at the pick-up point in Domain Rd as another shower passed over. No-one turned up, so I figured the abominable forecast had scared everyone away. I departed South Yarra at 9:35am and headed for the Eastern Freeway where I spotted John H on his way to Lilydale. Upon arriving at Lilydale there were already a number of bikes waiting. Obviously everyone had decided to skip South Yarra and go directly to the second pick-up point. A few more bikes arrived bringing the total to 14, which wasn’t bad given the forecast and it was the week before Christmas. I was expecting about another 14 people to meet us at Marysville bringing the total attendance for the party to 28.

So far we’d managed to dodge the rain and a final check of the weather radar showed we might be lucky and stay dry as the band of heavy rain that had passed over Melbourne earlier was moving out to the east and looked like it could stay just ahead of us. We departed Lilydale and turned off onto the Warburton Highway to Reefton via Warburton. We regrouped at the Reefton Spur turn off before we climbed our way along the twisty road to Cumberland Junction. We’d still managed to avoid any rain, although the road was quite wet as it was evident that heavy rain had passed through not long before us.

As we climbed up into the mountains the road became thick with fog/cloud. Making it hard to see the next corner until you were right on it. From Cumberland Junction we descended down into Marysville, deciding not to take the option of a quick fang up Lake Mountain due to poor visibility. The group arrived at Astor House (Marysville) just before 1pm, and amazingly somehow managed to miss any rain.

A few members had already arrived by car directly from Melbourne. By now the sun had come out and it was actually turning into quite a nice day. The barbie was fired up and everyone enjoyed a meat and salad lunch. At about 3pm Santa arrived, hanging out the sunroof of a Volkswagen Beetle being greeted by everyone who waived to Santa from the upstairs veranda. Santa had a large sack filled with presents for all the MMT members and friends. Everyone sat on Santa’s knee and opened their gift.

Later in the afternoon, most people headed back to Melbourne before the sun set over the mountains. Pete & Tim, John & Brett, Grahame & David W stayed the night and enjoyed a visit to see Stevenson Falls lit up at night. In the morning we walked around town and had a relaxed breakfast at the local café in the main street. Five of us on bikes headed back to Melbourne around lunch time, taking the most direct route via the Black Spur. Thanks to Grahame for assisting Michael in setting up for the party, and Michael R for the loan of some chairs and commandeering the BBQ and doing most of the cooking.