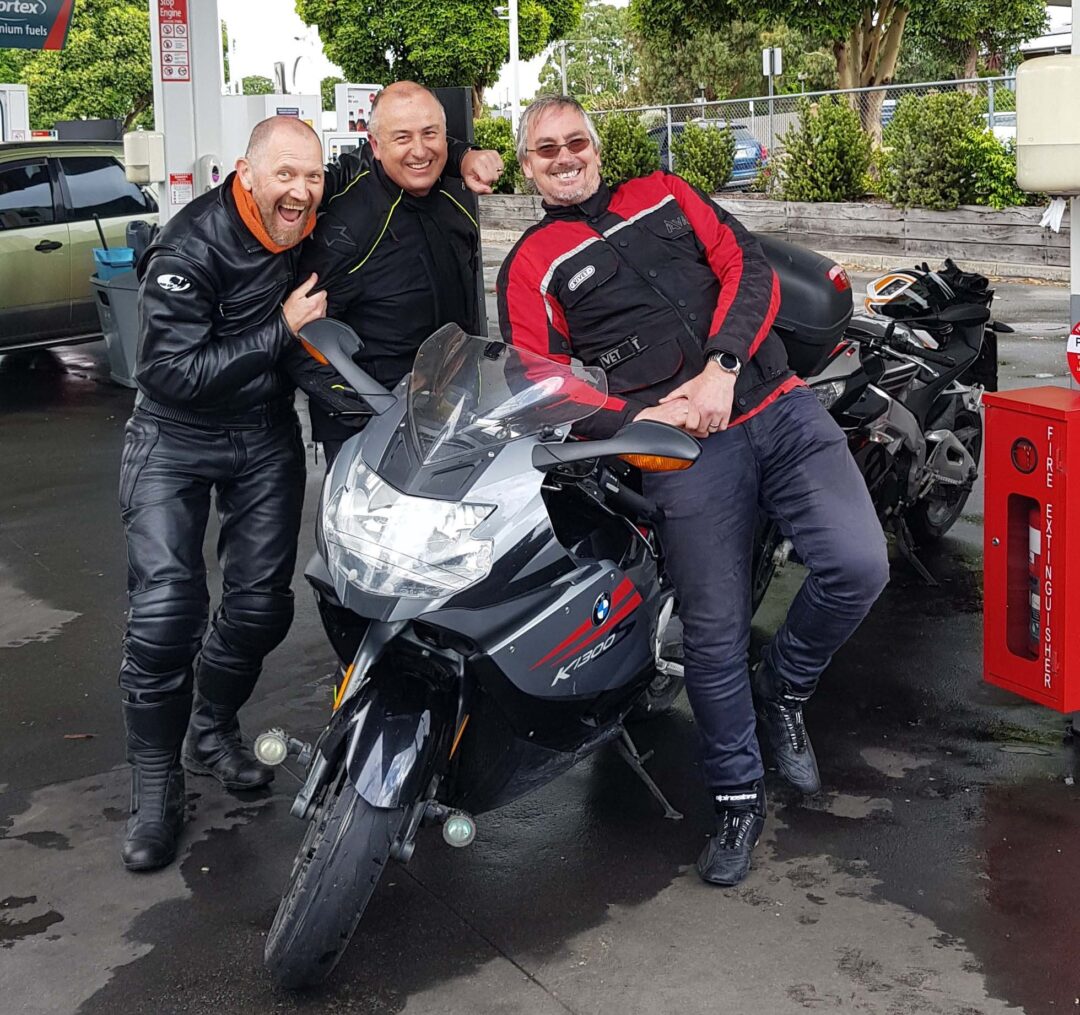 We ride for a range of reasons. For some, it’s for work, or for pleasure, and for others, 2020 was their worst nightmare with lockdowns, restrictions on movement, and border closures. So, it’s no wonder when we saw so many of these restrictions lifted, riders and pillions in MMT embraced what we so longed for. A new year brought new opportunities and appreciation for the exhilaration and freedom of riding a motorcycle.

What has become an annual placeholder event which normally launches our calendar year, usually lead by John Mathews was given a twist this year with John deciding to sell his Honda CBR650F due to it not being used and a change in their future ambitions to achieve. So, I was eager to help out and lead the ride section, ending in Musk for the after-ride festivities and for some, pitching a tent, or swinging the caravan door open for a more “a-hem” comfortable camping experience, also known as “Glamping”.

We started the day at the Laverton Shell servo on the Princes Freeway, with a departure time of 10:30am. I wanted to keep this as tight as I could, as I realised, from the pre-ride a few days earlier, that we had a lot of kilometres to cover (Not quite a Parrington, but I was being sympathetic) on this “Medium Length” ride. We farewelled Fab S and Steve K who rode down to see us off and was going to make their way up to Musk later in the day as it was a bit much for them to start with such a long ride. We headed off with Rob B, Peter Ha (H), Wayne B, Christopher F and Dan G in tow.

We headed South along the freeway and exited at Little River as my original ride was to take us via South Werribee out into the open plains, but on the pre-ride I became disorientated in the mass urban sprawl we now call Wyndham Vale. The new development has completely removed some very familiar roads and replaced open country with a new estate that took me about 25 minutes and 15 kms to get myself out of. I scribbled on my ride notes that we won’t be going “that” way. Bearings regained, I headed out on Ballan Rd, where this would have only added a short diversion to the original route until I hit about 10 kms of 40 km/hr roadworks which also had Lolly Pop Road Controllers holding everyone up for what seemed forever, so decided to go via Little River instead on the actual ride… yet uncharted.

My GPS, for reasons known only to the geeks who write the software, kept trying to push us back onto the freeway. So I pulled over to study the way I wanted us to go to head towards the You Yangs on our way to Meredith, when suddenly a couple of locals went out of their way crossing the road in their car pulling up in front of me to offer some local knowledge to set us right. It was noted that the letters on their personalised number plate suggested they may have been Jehovah’s Witnesses, but they seemed friendly enough, even though I had already worked out where we needed to go to get on the right roads.

We headed north around the northern end of the You Yangs and clipped the very end of the earlier-mentioned roadworks on Bacchus Marsh-Geelong Road before heading out into the hills and twisty roads, where we clipped the northern end of Anakie and headed out some very narrow back roads across to Meredith. From here, I realised even though we were avoiding travelling along any major roads for more than 5 kms, it was rather easy to remember the turn offs. It was literally right, then left, then right, then left and right then left through Shelford until we reached Winchelsea, where we decided to get some more fuel and a loo stop, as we expected Lorne to be quite busy. Just before our departure, a couple of bikers coming from the coast pulled up and we got talking to them. One was very hot in my opinion and I felt we could have done more to try and recruit them into the club, but they were both very friendly as they told us it was very wet, and very slippery through the coastal hills down to Lorne and also warned there were loads of cops patrolling through the twisty sections.

No sooner had we departed, the rain hit us which pretty much set the scene as we made our way to collect Silvio at Deans Marsh before continuing onto Lorne, which bizarrely was having bouts of sunshine and no rain.

We parked the bikes and headed over to the café where Phil R and David W were spotted as we passed. A lovely, relaxed lunch and a few had a quick squint down at the beach before we headed off along the Great Ocean Road towards Skenes Creek.

The traffic wasn’t as busy as I was expecting along the GOR, but it’s near impossible to not encounter those numb-nut drivers (and usually in SUVs, big 4WDs or a posh I’ve-got-a-lot-of-money-but-a-little-weener car) who obviously think the mirrors on their vehicles should have been an optional extra that they wouldn’t have paid for, who simply ignore Slow Vehicle Turnouts even though there’s a whole stream of other vehicles backing up behind them. So I got to exercise my left thumb on the horn button a few times. I fear you just can’t educate the stupid out of some people.

Heading back up into the hills, the rain started and persisted what seemed might be for the rest of the ride. Little did we know this was to prove about right. We detoured onto Turtons Track, which is a lovely 18 km, very narrow 40 km/h two-way twisty track through the Otways rainforests between Tanybryn and Beech Forest. A few slippery moments as the water, debris and mud across the road on some tight hilly corners made for a test of our riding abilities, even at such a slow speed. None-the-less, well worth the detour to experience such a beautiful part of Victoria.

We had a final fuel stop at Colac, where Silvio, H, David, Christopher and Dan headed off in their own directions. We also had a parting quote from Silvio as the only 3 continuing onwards and upwards right through to Musk as “The Three Musketeers”, which was very fitting. Phil was also joining us for the majority of the ride but was leaving us near Creswick to spend the evening at his mother’s.

It was a rapid ride north through Beeac, Cressy, Rokewood, Enfield, Ballarat and Creswick before arriving in Daylesford to get some beer. Then came the final leg a cross to Musk for friendly smiles, laughter, pizza and cakes to end a long day in the saddle… for some, as Rob B and I still had the head back home to Melbourne as the day was fading like my energy levels.

Thanks to everyone who came on the ride, I know some felt it was quite long, but have a thought for me who had to do it twice within 3 days… ha ha…. You’re soft I tell ya! Thanks to John M and John H who have let the club invade their home for a number of years, and have always been excellent hosts.

We never know what the future will hold for this annual event, but if it has run its course, then I would like to extend our absolute appreciation to the two Johns, Polly and Champ… along with the fur babies who came before for so many years of fun.

It was so good to be able to welcome the MMT back into our home for the Musk Muster. It was great we could proceed as usual. We had things a little easier here in Musk than you folk in Melbourne during the COVID lockdown and we thought about you often.

We had 1 intrepid camper this year with Ray pitching his tent out near the nut trees while the bedrooms and basement room accommodated David, Michael, Wayne, Craig and Puku.

We had around 15 here for pizza, cake (thanks for the sensational choc cake Paul) and a few bevies after the ride with a few opting to drive up for dins or making their own way on the bike.

Sunday morning, we went into Daylesford for breakfast and were joined by Hosko, Charles and friend Josh who had been staying in Trentham.

I’m in the process of selling my bike currently. With John now in the throws of retirement we want to spend more time getting away in our little caravan and generally hanging out together. After 36 years we still seem to get on ok which is encouraging…

I’d love to maintain my membership and contact with the MMT and we certainly would love to continue to host the Musk Muster if people still want that. I have many fabulous memories of great rides and trips over the years and cherish the friendships made.