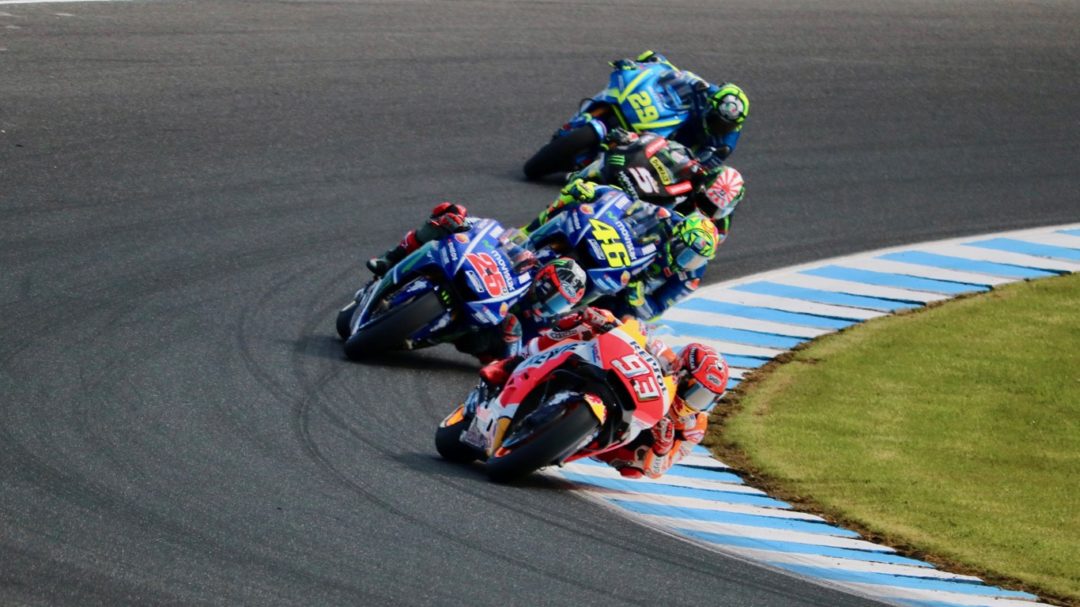 It was the Thursday before the Australian MotoGP at Phillip Island, and after three days of glorious spring sunshine it was pouring with rain as Michael & I threw a leg over the bike to head down to the Island. It rained steadily as we made our way through Cockatoo and Pakenham before stopping for an early lunch at Grantville. We parted company after lunch as Michael was just out for a day ride while I continued on to Phillip Island. I arrived at the Trackside campground around 1pm. The sun was out just in time for me to set up my tent. Carmine was on his way, and David W, Pete & Tim were joining us the following day. Once my tent was erected, I mingled with the other campers who were full of excitement in anticipation of what would be a great weekend. I caught up with Carmine in the late afternoon and we headed into Cowes for a look around. The main street of Cowes was buzzing with motorcyclists everywhere. We ended up at the pub where I met a few people I know and settled in on one of the tables in the beer garden. We started chatting to three plumbers from Morwell who were doing some work in Cowes. They forgot that it was GP weekend and were having trouble finding accommodation, so they decided to go to the pub and get pissed and worry about where they might sleep later. The three young, buffed tradies had us in stitches with their antics. During the course of conversation it was revealed that one of them liked a finger up his rear. However he was quick to correct his fellow co-worker by saying he’s now up too two fingers! For the rest of the evening he was referred to as “Scotty Two Fingers”.

Friday morning Carmine & I had breakfast at the Champions Café inside the GP Circuit. After breakfast we wandered around the bike & merchandise expo, and then moved around the track to various locations to watch the practice sessions. David W, Pete & Tim joined us in the afternoon. “H” & Tim were also at the track for the three days, but commuting home each evening. Pete, Tim, David, Carmine & myself headed into Cowes for a Chinese dinner. We stopped off at the pub on our way home to find two of the plumbers back there having a drink with no sign of Scottie Two Fingers. Apparently Scottie was in hospital after almost slicing his thumb completely off with a sharp piece of tin. The mind boggles!

Saturday was qualifying with Marc Marquez taking pole position, followed by Maverick Vinales and Johann Zarco. Aussie Jack Miller qualified fifth. Saturday night we decided to stay in the campground where there are live bands playing every evening, as if the camp ground needed any additional entertainment. We had our obligatory campground “Prison Food” (as once described by Rolf Forster) served up out of a food van before socialising with our fellow campers.

Sunday we took up our seats in the Siberia Grand Stand and watched the three premier classes, Moto 3, Moto 2 and of course the main event, the MotoGP. The Aussie entrant Jack Miller lead the main race for the first few laps much to the delight of the home crowd, but was soon overtaken by riders further up the points board. Marquez was first over the finish line closely followed by crowd favourite Valentino Rossi, then Vinales. Once the last bike had gone through the crowd invaded the track and it was all over for another year. We made our way back to the camp ground and freshened up before heading into Cowes for dinner.

Monday morning we packed up our tents and headed home. There was still quite a lot of slow moving traffic getting off the island, but the bikes were able to slip through easily maintaining the speed limit.

This was another great year at the island and I always seem to come home with sore stomach muscles after laughing so hard for three days with awesome company.

We have secured a house in Cowes for next years event, so if you’re interested in joining us for a great weekend and would like to stay at the house, contact us for details.