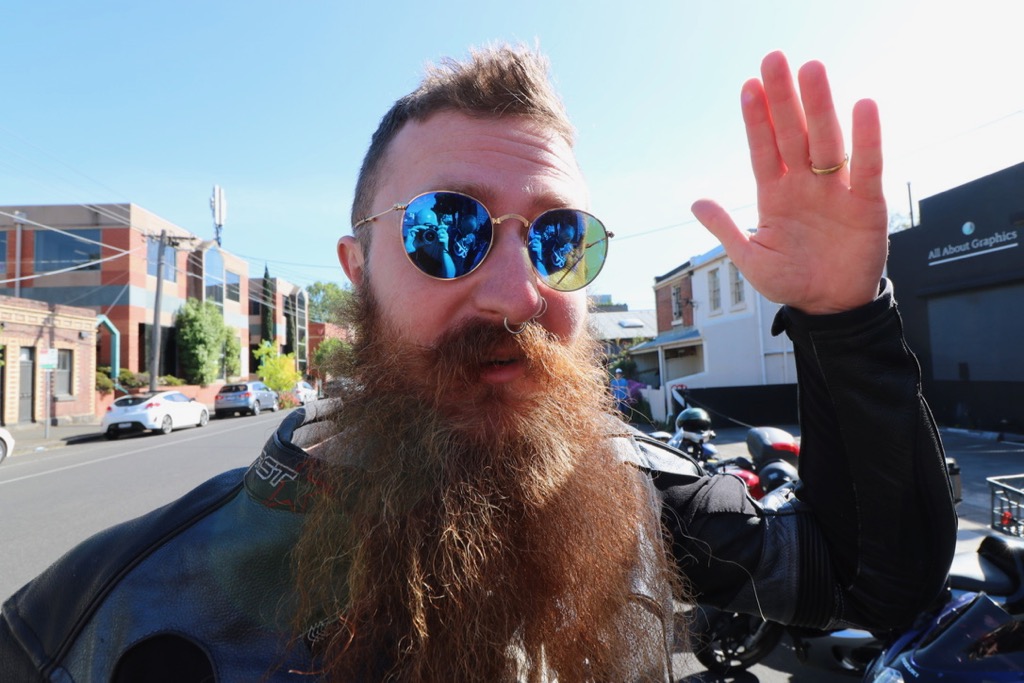 The hardest thing about photography is actual getting out and doing it!

The cameras are heavy and the batteries need to be charged. Often rides with the club, while they are amazing, can be a bit rushed. Especially when we have lunch bookings for 15+ people it makes it hard to stop at all the nice spots along the way for snaps!

With this ride I really wanted to slow down restrict the number of scheduled stops so we could just relax and take the day as it comes.

The meeting point was south of Johnson café. A great spot, with bike parking out the front. Everybody had coffees and after a quick briefing we were off to the first photo location – “the teardrop” at Studley Park – a closed section of road that is accessible just on bikes and by foot. This area is a great spot to take photos, as there’s no danger from traffic and I’m sure we got some good shots. We then had another quick photo-stop, on the bridge over the Eastern Freeway, with the CBD in the background, where a random L plater tried to make friends with us and got scared shitless when we mentioned we were a gay motorcycle club. Then two scooters showed up as we were leaving, instructing is to move on as we were blocking the path …… just like 100s of cars were 100mts away for “parking” What the!

Then we had a blast all the way up lower Heidelberg Road, through the Greensborough bypass to the Yan Yean reservoir where there may have been a U turn and two people got a little bit lost – oops!.The day was stunning and Yan Yean was pumping with picnics and BBQ’s everywhere. When last visited it had been super quiet and the grass Hills and blue water had been super relaxing, but not so much today with heaps of people everywhere.

Then it was a quick squirt though some nice tight twisty bits, with not to many cars, to Hurstbridge for lunch. This is the bit I hadn’t had a chance to have a pre ride, to so had no idea where to stop or what was going to be good for lunch. After much miscommunication, we settled on the Bakery for speed and tastiness ;P

After that, we headed out to the Sugarloaf reservoir, for its awesome ride over the dam wall and nice parks to take photos. As it turns out, you can ride all the way through (see photos ;P) After a long break taking snaps we headed to Yarra Glen to refuel. Some headed directly back to Melbourne but most of us headed back to Melbourne via King Lake with a quick stop at Whittlesea for a coffee and got chatting to a random Harley rider.