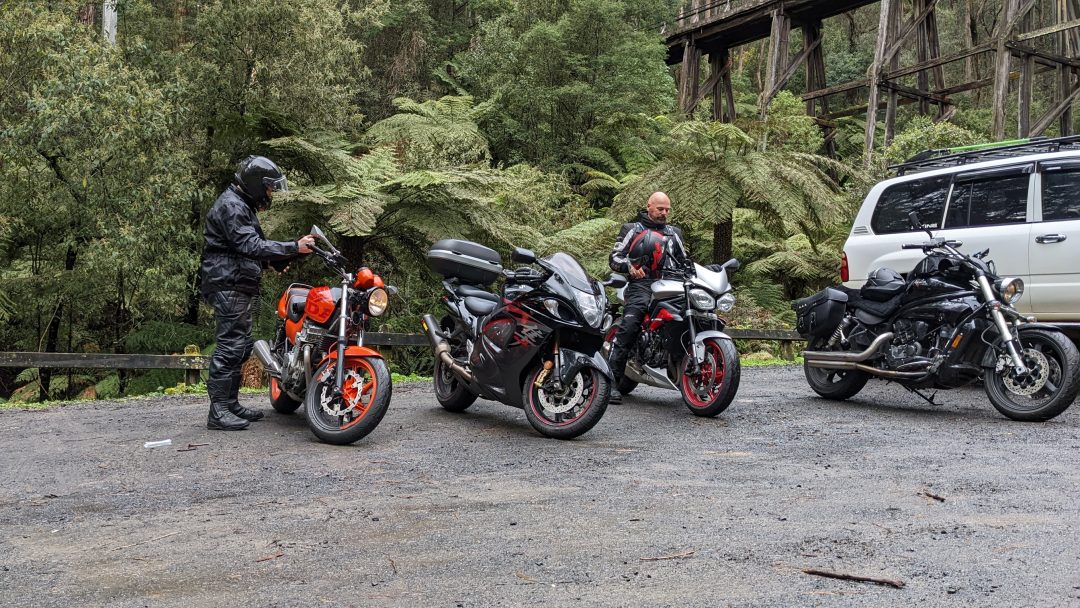 On a cold and wet Sunday 18 September, Rob, Fab, Pete, Benji, and Michael decided to go for a ride. They all met in Lilydale and, with Michael leading they trundled out of town towards Warburton. On they went, ignoring the overcast and threatening skies.

Then it started to rain.

“Nothing will hurt us,” said Rob

“My motorbike was really pretty before, and now it’s dirty and ugly”, whined Michael

On and on they rode, leaving warm dry beds and loved ones further behind. Turning right at Yarra Junction towards Powelltown, they braved wind and rain, wet and muddy roads, and crazed-up weekend warriors in their muddied-up 4WDs.

Eventually, they splashed to a stop at an old railway trestle bridge in Noojee. They dismounted their trusty steeds and climbed the slippery steps up to the top of the bridge to admire the clouds and rain from a different perspective. Except for Benji – he slipped away unnoticed to hatch an evil plan.

After Benji cunningly rejoined the group, the group meandered into town, did an obligatory circle of the streets to mark their territory and terrorise the locals, and then sidled up to the Noojee Hotel for refreshing beverages and wholesome food. Benji then launched his plan into action, surreptitiously sneeking out a BIRTHDAY CAKE(!) for his hubby, Pete, to celebrate Pete’s 30th birthday. Who said,“real gay motorcyclists don’t eat cake”? Well, Rob did. But everyone ignored him…

Deciding that none of them were really very brave at all, they all decided not to travel into the dark, mysterious void that would take them to that horrible place called Mt Baw Baw, because the weatherman said it would be much colder and much wetter there and only stupid people in tin top vehicles with at least dual-zone climate control would ever venture that way. Instead, they all snuck away back towards a warmer, sunnier place called Melbourne. Only it wasn’t…

As the group splashed it way Northwest, dark clouds gathered overhead again and before they arrived at Yarra Junction the Gods smyted them furiously with huge drops of molten lava…

Oh. No, wait, that’s not quite right – it pissed down really hard, and they all got wetter.

At this point, Benji and Pete decided to make their escape, eventually losing each other somewhere between Yarra Junction and Lilydale. If anyone spots them circling aimlessly, please send them west.

Meanwhile, Rob, Fab, and Michael were dumb and decided to take the road less travelled to Gembrook. This place was favoured by the Gods – while fire and brimstone rained down all around the countryside, the road to Gembrook was gently coated by fluffy white hailstones the size of marbles. Whilst brave Rob and Fab wanted to continue, wimpy Michael stopped and cried because he was scared. So, he made them all wait while the hail dispersed, before continuing on to Gembrook.

Once they got there, they all had nice warm cups of Milo and decided to go home and that they will never, ever ride motorcycles again.

← 2022 Joint MMT & Motafrenz Ride to Steels Gate Winery – August 2022
Manage Cookie Consent
To provide the best experiences, we use technologies like cookies to store and/or access device information. Consenting to these technologies will allow us to process data such as browsing behavior or unique IDs on this site. Not consenting or withdrawing consent, may adversely affect certain features and functions.
Manage options Manage services Manage vendors Read more about these purposes
View preferences
{title} {title} {title}