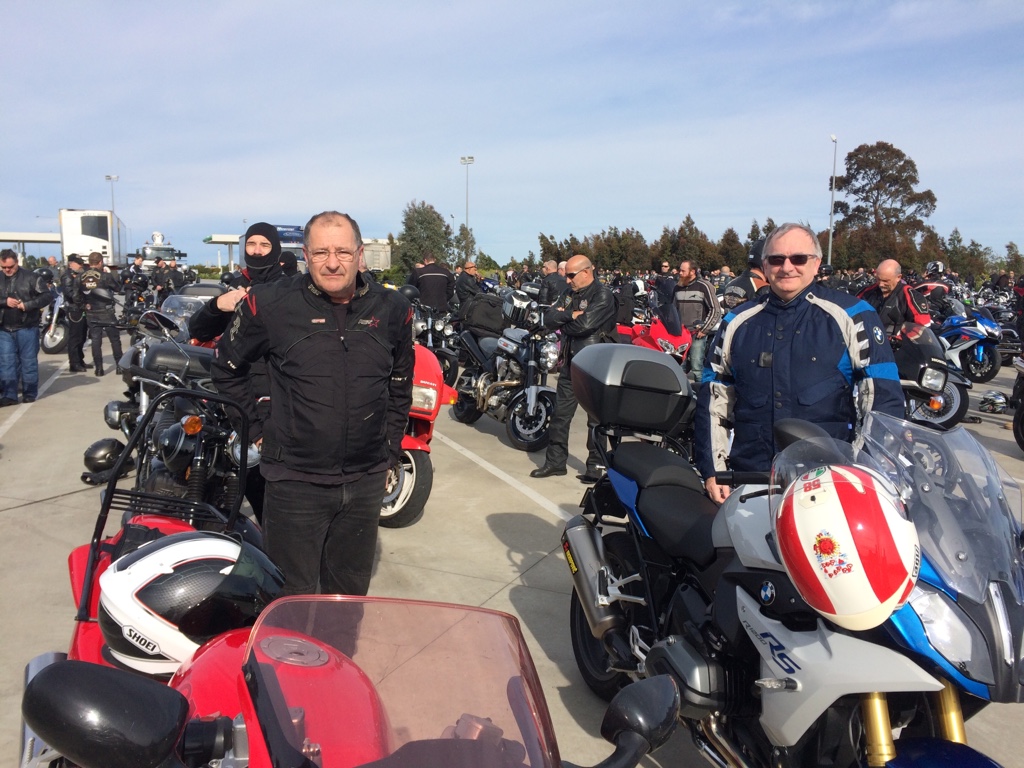 Back in June, the club ride, organised by David and Michael (although sick as a dog and couldn’t make it) headed up to the Inline 4 Café in Mirboo North for lunch. While we there, the owner Marcel told us all about the ‘Blessing of the Bikes’ event that he organised in October each year; with this year being planned to be the third time the event was held in Australia. A few of us were keen to go but it was going to clash with the planned club event.

As fortune would have it, Kate’s Mount Buller ride had to be postponed following the wild winter and spring as there was still snow and ice on the Mountain so the weather wasn’t looking ideal for motorcycles. This was a good call as there was a good dumping of snow the weekend before.

This saw David make the 3rd Annual Blessing of the Bikes the club ride for October. It was decided to join in pre-organised ‘United 4 All’ ride up to Mirboo North from the BP at Officer, with no city meeting point. Six of us, David and Michael, Nick, H, Glen and myself, met at the BP and joined over 1000 other riders from all over Victoria. There were so many bikes there, of all shapes and sizes, that they took up all of the truck parking spaces at the Servo. After a briefing from the President of the Gippsland Motorcycle Club and Victoria Police, and under full police escort, we were on our way down the very boring Princes Freeway. The group got a long at a cracking pace and were soon very spread out, probably almost too spread out, but probably just as well as riding in a pack of 1000 bikes could have been interesting. Although we were supposed to go past Moe and turn right onto the Strzelecki Highway and up to Mirboo North, David, Michael, Nick and I were together and when half the group turned right at Trafalgar, we followed suit because the road has way more twisties and is much better riding than the highway. H and Glen continued down the highway.

After arriving in Mirboo North, we all parked together and secured helmets and gear with our bikes as H and Glen arrived and spent the next few hours wandering around Mirboo North, looking at all the bikes and doing lots of people watching. As we walked through town, Stephano had arrived and joined us, after he had arrived about 15 minutes after the ride left Officer. He was fashionably late, but meant there were now seven club members along for the ride.

The event was well supported by locals, including local business and local band, as well as sponsorship and support from the TAC to support motorcycle safety. There were a couple of guest speakers, including motorcycle legend John Woodley who gave a history of his experiences on the racing track, with anecdotes of his trials and tribulations with his racing bikes and his racing days. Isle of Man legend-in-the-making, David ‘Davo’ Johnson, gave some insights to his experiences racing on the Isle of Man, as well as recent injuries sustained.

The sights were good if you like Harleys, or the types who ride them, and for once, us Beemer riders were grossly outnumbered (even within the club members, we were a minority!).

After looking at the various stands and stalls and eating (well I think that is was Stephano was doing) some junk, we listened (as much as we could hear from the back) as the 34 riders killed on Victoria’s roads in 2016 were remembered, a solemn reminder of this year’s road toll and the uncharacteristic ratio of riders killed. There was helmet placed to remember each of the 34.

Mid-afternoon we headed away, H heading off on his own as he headed through Korumburra back towards home. The remainder of the group rode back over the hills to Trafalgar so that some could refuel and left Nick there as he headed back up the Freeway home. David, Michael, Glen, Stephano and I were over Freeway travel, so headed up the Freeway only as far as Nilma and then up to Neerim South, through Nayook and Powelltown to Yarra Junction, where I left the group to head home.

For me, it was a short 297km round-trip but the weather was kind, 17-25º throughout the day and some high clouds, with no rain but the wind was getting up a bit on the way home.

← Pete’s ‘Sth Gippy’ Excursion Brett & Adz’s ‘Coming Around Again’ Ride →
Manage Cookie Consent
To provide the best experiences, we use technologies like cookies to store and/or access device information. Consenting to these technologies will allow us to process data such as browsing behavior or unique IDs on this site. Not consenting or withdrawing consent, may adversely affect certain features and functions.
Manage options Manage services Manage vendors Read more about these purposes
View preferences
{title} {title} {title}