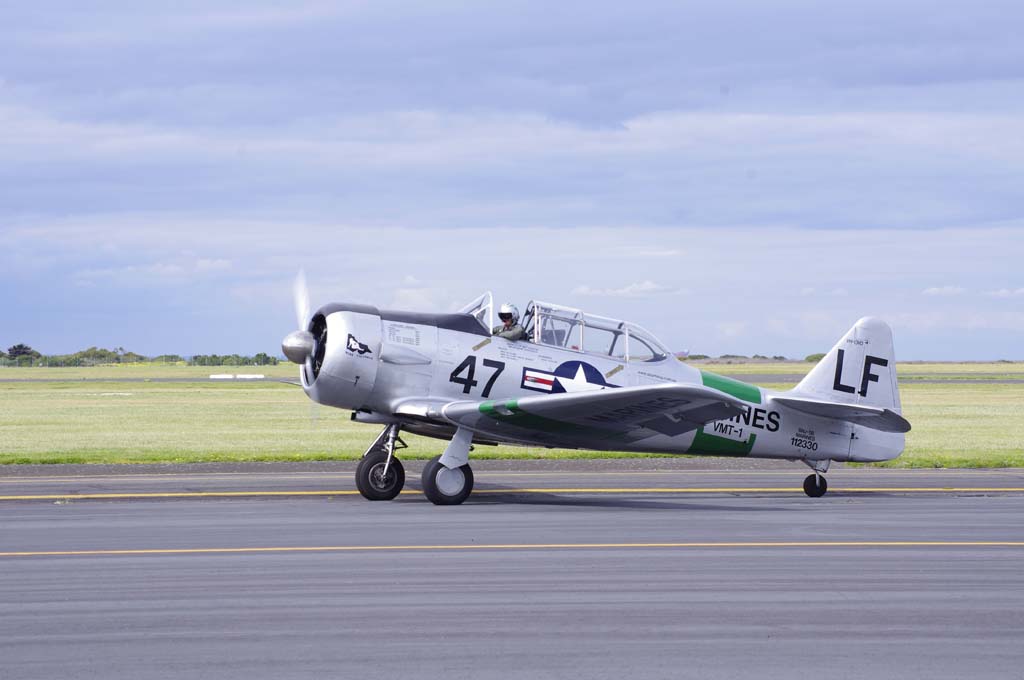 by Pete and Tim.

This ride report was originally published in the September – October 2012 issue of the Motorcycle Tourers club magazine, ‘Chain Lube’.

The original idea for the ride was going to be planes, trains and automobiles ‘around the bay’, but when we realized there as no way we were going to fit everything in we decided to restrict it to just planes and visit / ride by as many airports as we could in one day.

A group of about a dozen bikes gathered at the first meeting place in South Yarra, enjoying a coffee and brekky supplied by the various trolly dollies from the local cafe. After all the luggage had been stowed away, Captain Peter Thomas Holmes announced our departure and the group made it’s way, via City Link and Essendon Airport, to the second meeting place – the aircraft viewing area on Sunbury Road just after Tullamarine Airport.

On the way, a short detour into Essendon Airport gave the first group the opportunity to view the first airport for the day and marvel at the only Aero Crossing/Jet Crossing (similar to a railway crossing) in the southern hemisphere that allows planes to taxi cross a public road in order to get to the runway. It’s also worth noting that Kylie Minogue filmed her first ever music video for her debut single ‘locomotion’ at the Essendon Airport in 1987 – the year Captain Peter turned 21 and got his pilots license!

Just over 20 bikes taxied into the car park and gathered with an assortment of red Ferrari’s, who had obviously come to see us off. After lodging his flight plan with Air Traffic Control, Captain Peter rallied the troops, turned the no smoking sign on and escorted the squadron towards the next airport.

Making our way through various back roads, past Clarkefield Train Station, onto a Settlement Road (a partially dirt road with some lovely scenery) we then passed our second airport for the day, Sunbury Airfield, which is the home of several light plane and Ultralight flying schools as well as a Paintball company.

Dodging a barrage of paintballs (yeah sure!) the squadron continued towards Riddell’s Creek, over to Mount Macedon via Mt Eliza Road and Straws Lane then on to Gisborne where we stopped for morning coffee.

After a short break, and a quick duty free shop, Captain Peter once again gave the boarding call. With seat belts fastened and all trays in there upright position everyone headed towards Bacchus Marsh via the Bacchus Marsh-Gisborne Road which has some great views back towards the Lerderderg State Park and Melbourne in the distance. Continuing over to Werribee then onto the RAAF Base at Point Cook where the landing gear went down and a smooth landing was made at the RAAF Museum (http://www.airforce.gov.au/raafmuseum).

The RAAF Museum at Point Cook was the birthplace of the Australian Flying Corps and the Royal Australian Air Force. The museum houses a huge collection of aviation artifacts and helps to tell the story of Australia’s aviation history. We were just in time to attend the Interactive Flying Display, where we had the opportunity to hear about, and see first hand one of the heritage planes kept at the museum, a CAC Winjeel A85-439. This plane was build in 1956 and was used in various training roles both in Australia and abroad until it returned to Point Cook in 1996 where it has been operated by the RAAF Museum Historical Flight in displays.

After spending an hour or so looking through the museum (which is so large and interesting it deserves another visit), the squadron made it’s way into Point Cook for refreshments at a local Italian Restaurant.

After lunch and a quick top-up of fuel, the group flew via the You Yangs and Mad Max filming territory, towards the next airport – Avalon. Unfortunately, the weather looked threatening and the radar showed some heavy storms coming our way so the squadron turned tail and made their way home to North Melbourne where afternoon tea was served to all the weary pilots.