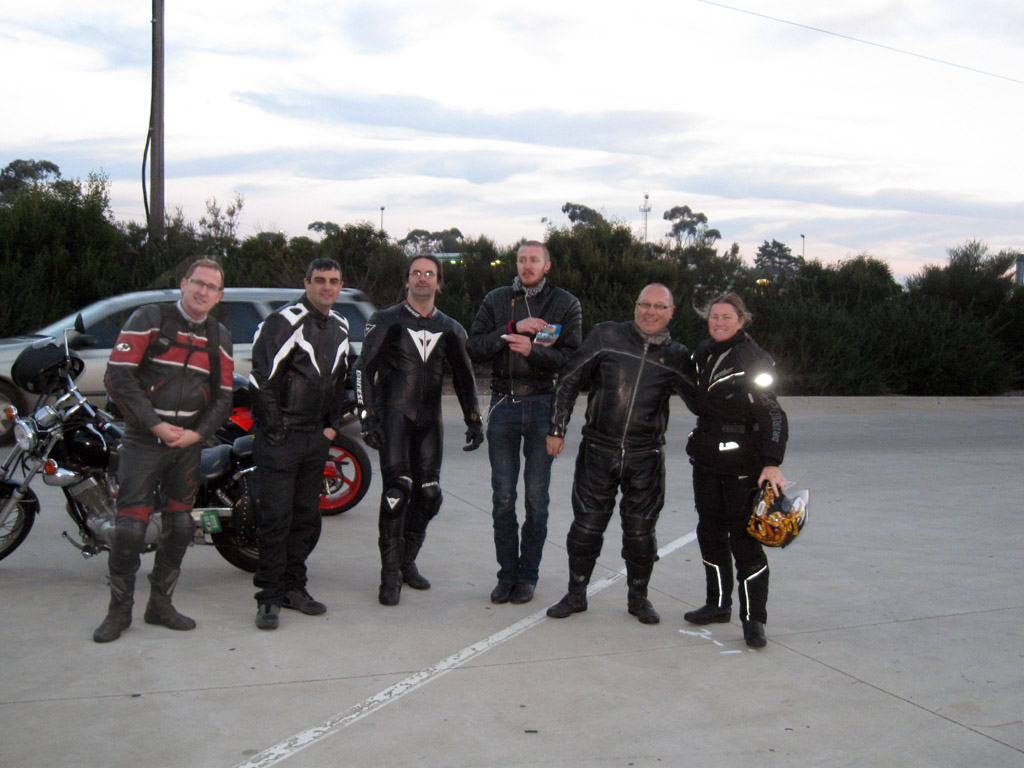 This ride report was originally published in the June 2010 issue of the Motorcycle Tourers club magazine, ‘Chain Lube’.

Records tumbled yesterday when five riders were ‘lost’ during a club ride. It is believed that this is a record for the Club.

What began as a promising day ended with four riders and a pillion disappearing up the road to Skipton with a bunch of foreign men on strange bikes. Here’s how the day’s events unfolded.

The 16th of May, 2010 was a late autumn day, much like the one before. It started out foggy but by 10am the sunshine had penetrated and the clouds cleared to reveal a beautiful clear day. Although there was a slight chill in the air, there was not a breath of wind – the perfect day for a two-wheeled frolic through the countryside.

Just as the fetchingly attired Tourers (Nathan and pillion Dean on the ZXR6, Greg on a Madge, Mofflehoff, Evan and Max on cruisers,) were about to leave South Yarra, Arbel turned up on his brand new Suzuki GSXR600, complete with fancy decals. Although Arbel had ridden a bike when he was younger, he hadn’t ridden since and had just that week bought a new bike and decided it needed a decent outing. We made it to Laverton without incident where we met Linda, John H and Mark D.

Due to the normal presence of the constabulary on this piece of road, we motored down the freeway at a moderate pace and took the Little River turnoff over to, not surprisingly, Little River, then over to the Geelong-Bacchus Marsh road. A bit further down that road, a right turn had us heading towards Anakie. As we came over a rise, an idyllic view of the rocky foothills of the Brisbane Ranges basking in the morning sun unfolded before us. It was indeed a vision splendid and made getting up early on a Sunday worthwhile. Along eucalypt lined avenues we sped, down the steep curvy road to the one-laned bridge at Morrisons and then up the other side and along the bumpy road to Meredith where Gary VDD was reading a book in the sun outside the pub. We enjoyed a coffee at the Meredith Country Café before we took the rough narrow strip of bitumen to Shelford where we turned right onto the highway and then left down a road which curves its way along a creek valley for about ten kilometres to the Hamilton Highway. It was a quick spurt along the highway to Wingeel and then left down narrow potholed bitumen roads to Ombersley and then to Eurack – not that you’d know you’d been there as they were just localities. The beautiful green paddocks bathed in the late autumn sunshine – full of very handsome cows straight from a Milka ad (the bulls in this area are obviously very lucky) – were a picture of bucolic contentment. Note to self: stop looking at cows and concentrate on the road.

We turned right at Beeac and rode past the white expanse of salty Lake Beeac to Warrion, pulling up at the Ti Tree hotel ahead of schedule. We were the only ones in the pub and had unfettered access to the fire in the bar to warm our arses by. After ordering, the publican’s wife whipped up 12 meals with extra chips, while we enjoyed the sun outside.

Now a few kilograms heavier, we rode the few kilometres to Coragulac (lots of lacs in this area) and turned right to Alvie. Finally we wended our way up to the Red Rock Lookout for a fabulous view over the surrounding plains. The lookout is atop an extinct volcano and gives one a fabulous view over old cinder cones, to Lake Corangamite in the west and towards Colac and Lake Colac in the east. On the way back down we rode via the memorial dial so the official ride photographer could get a good shot of us all.

Down from the lookout and around the back of the hill and along the shores of Lake Corangamite, we continued on to Colac… well nearly all of us. We pulled into the first servo in Colac and last to pull in was Mofflehoff with his first ever pillion – Evan. Unfortunately Evan’s tank had emptied a little earlier than expected. Mofflehoff took Evan, along with a tin of petrol back the few kms to his bike while we waited at the servo.

Once we were all fuelled up we continued on through Colac, unaware that disaster was about to strike! Cue foreboding type music. While riding through Colac, we got intermingled with another group of bikes (a bit of a rag tag bunch I must say – certainly not as exquisitely attired as The Tourers) and just out of Colac, they had a corner marker marking a left hand turn up towards Cressy and Skipton. The person corner marking was a short, shabbily attired harridan (so it seemed to me anyway, admittedly helmets make it hard to tell). Some of the colour and fashion blind amongst us blithely followed the other group and headed north towards who knows where. At least Gary VDD knew he was heading in the right direction. A few kilometres down the road, the headlights behind me seemed to have thinned somewhat, so I pulled over. We waited for a few minutes and found we were now only six. After waiting for about ten minutes, we thought they’d probably enjoy the long scenic route they were taking with strangers. So, we turned off towards Birregurra and hurtled along that great road that runs parallel to the A1. We turned north at Moriac, continued over the A1 up through the Barrabool Hills to Ceres and onto the freeway to Melbourne. By the time we stopped at the Little River BP dusk was well advanced, so we said our quick goodbyes and jumped on our trusty steeds and headed back up that bloody boring freeway to Melbourne and home.

As Oscar Wilde said: “To lose one parent may be regarded as a misfortune… to lose both looks like carelessness!” What’s losing five bikers then?