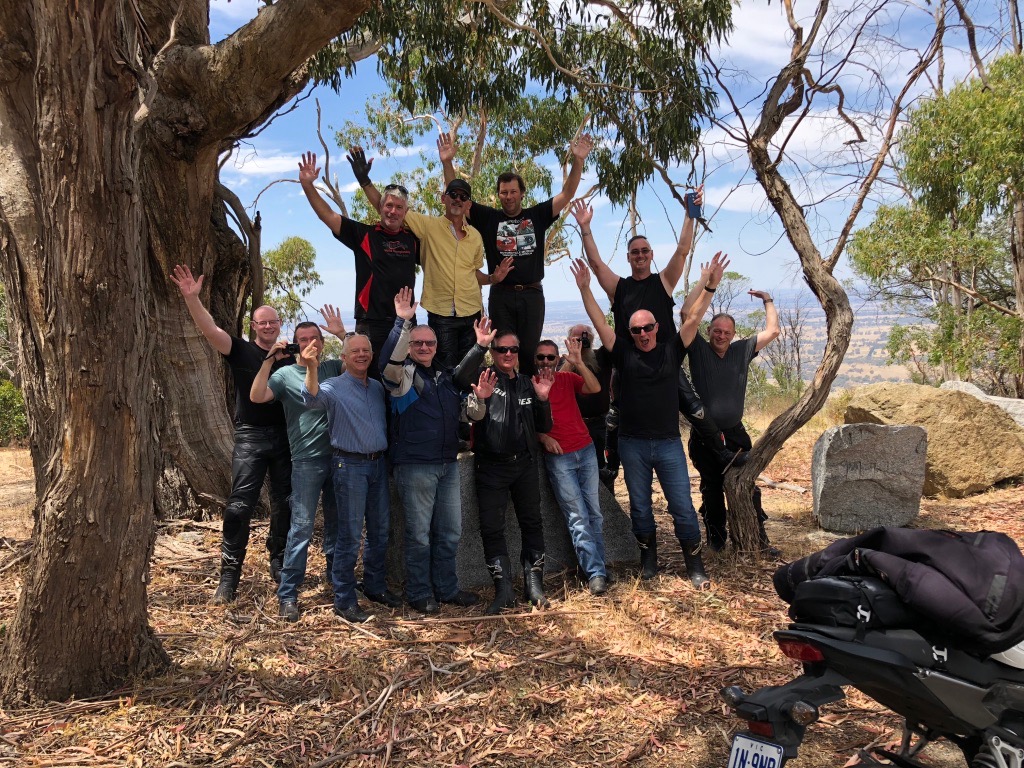 We met at the airport viewing area near Sunbury at 10.30. Thanks Pete and Tim for leading the
ride from Melbourne for me. Beautifully executed as we all arrived at the same time. 10 familiar
riders being Paul, Rolf, Brett, David, Christopher, Tim, Pete, H, Wayne, Christian and me.
From there we went north through Sunbury to Riddells Creek and across the lower part of the
Macedon Ranges via Kerrie. One of my favourite roads. Always beautiful no matter the season.
Heading back towards Woodend we diverted and rode to the summit of Mt Macedon (volcano
one…see where this is going?). A bit of a walk to the memorial cross and a look around the
gardens and a cold drink for those who wanted one. A pleasant 25c at this point. We descended
the mountain rode through Woodend and Kyneton to Malmsbury for lunch at the Motobean Cafe.
Once we crossed the divide the temperature climbed rapidly to 36c. Meeting us there from the
north of the state was Doug and Dean. A great lunch spot that accommodates larger groups well.
Good menu and service. After a leisurely lunch we put on the riding gear to head off to Mt
Alexander near Castlemaine. We took the Faraday/Sutton Grange road to the summit of Volcano
number two. Temperatures are now heading north of 40c with riders recording 42-44, depending
on whether you ride a Honda or a BMW. Great road and if you could see the view through the
sweat on your eyelids it was also worth it. We descended Mt Alexander the other side and down
through Harcourt and to Maldon to traverse volcano number 3, Mt Tarrengower. A regroup in
Maldon and then onwards and upwards! On top of Mt Tarrengower is a fire spotting tower and
you can climb 2/3rds of the way up. It’s an epic view but sadly not an ice cream vendor in sight! A
fire had recently broken out out near Smeaton which was a little concerning on 2 counts. One, it
obscured the view a bit and two, we were sort of heading that way to Mt Franklin, volcano
number 4. Back down the mountain and back into Maldon for a cold drink and regroup. At this
point Paul realised he was missing his phone! The temperatures were sitting around 42 still and it
was decided we would just ride past Mt Franklin and head to Musk. Paul diverted and rode back
to Mt Alexander in search of his phone while H and Rolf departed south to cooler temperatures
and home.

The rest of us arrived back in Musk around 5pm, a little hot and sweaty and in need of cold bevies
and respite from the heat. Musk temperatures were a civilised 28-30. We rode only around 170km
from Sunbury but that was enough given the heat. Meeting us back in Musk were Darren and Ian
complete with caravan, Ken and pooch in their camper trailer, Michael with canine companions
Chloe and Heidi. My John was also there. Our dog Champ was again overjoyed to see Chloe. He
remains smitten and love struck to the point where his constant attention can lead to abrupt
rejection. His perseverance and need to be loved in return is somewhat troubling and we continue
to workshop it with him.

Tents pitched, a run to bottle shop done we were ready to relax. Brett farewelled us to return to
Melbourne and Paul arrived back without his phone. Cheryl arrived in the car and pitched her tent
and James arrived from Trentham to join the group.

We finished the day with a bbq and cake with one or two drinks along the way. Thanks to Dean
who gallantly took on the job of bbq cook.

Sunday morning we had breakfast in Daylesford at the Good Food Store. Owners Gary and Shane
have hosted us on several occasions and serve a great breakfast. Shane also gave me a sponge
for the club the day before to have after our bbq!

After breakfast it was back home to break camp and men, women and dogs to head away home.
A tour of Paul’s country home in Lyonville was also planned for those who wished.
Thanks again to all who participated in what I think was our 7th Musk Muster? We always love
having everyone there to share what I think is a pretty special part of the world.