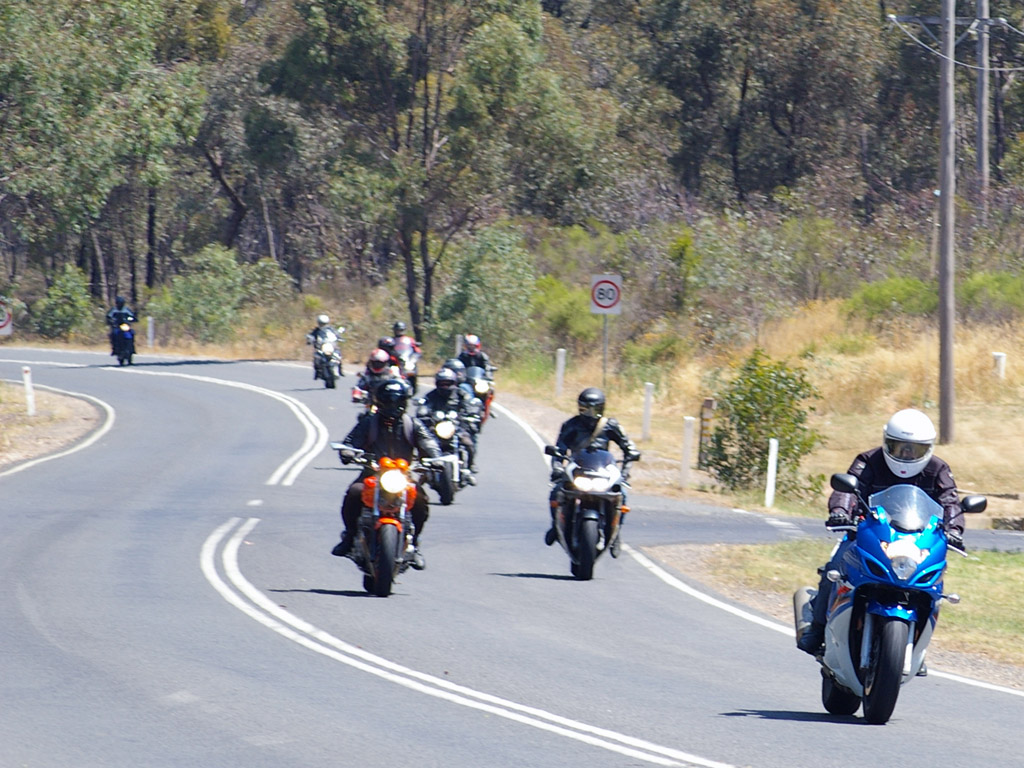 This ride report was originally published in the February 2012 issue of the Motorcycle Tourers club magazine, ‘Chain Lube’.

The weather Gods were undecided with their plans as I left Musk at 7.30am to head to South Yarra for the first pickup at 9.30. A little fog, a little drizzle but hell….what would you expect it’s summer! I was dressed for a warm, dry day of riding. The forecast was ok for riding and a camp over and the Met never gets it wrong! As it was, the day got better as time went by.

Arrived (as planned) at 9.00am to ensure a top up of caffeine levels before heading off at 9.30am. Ash and George arrived at the same time along with Christian, David P, H, Craig, Evan and Moff. With slight nervousness we headed off towards to the Westgate and Laverton. Last year I mean’t to head off towards the Bolte Bridge and ended up going over the Westgate. Miraculously the Laverton servo appeared and with my confidence growing we arrived (well before the appointed 10.30 second pickup).

We were joined by Tim L, David W, Rob B and at 10.30 (as planned) we headed off towards the You Yangs. It was again with some trepidation as I did a pre ride the week before and got lost….several times! The importance of vigilant corner marking was reinforced as there were many corners to be marked. H was very concerned when 2 sections of unsealed roads were mentioned. Apparently near new BMW’s don’t like dust. A tedious ride along the Geelong Freeway saw us heading off at Lara and up past the You Yangs through Maddingly (near Bacchus Marsh) and through the Werribee Gorge State Park and 6.2 km of unsealed road I’m told to Ballan. As we were running a little ahead of schedule we took a spontaneous coffee break at the Ballan Providores. I was a little nervous as the sole barista seemed very relaxed and took all coffee orders before cranking up the coffee machine. Timing is of the essence and even though we were running ahead of time one can’t be complacent.

A pleasant coffee break in a really quaint spot was worth the stress of nearly being late. On the road again we took the back roads into Ballarat via Mt Edgerton and Navigator. We arrived at GC’s pub right on 1.00pm (as planned). Peter Ho arrived from Melbourne to join us for lunch at around 1.06pm. On checking my mobile phone there were several messages from Brett and John who motored sedately up their Mercedes Benz wondering what route we were taking to Maryborough. The pub was busier than expected as the Ballarat Beer Festival was in full swing. After a relaxing lunch (promptly served) we refueled and headed off down the Western Highway turning off at the Sunrasia Highway going past the enormous Waubra Wind Farm through Lexton, Talbot and into Maryborough. Our large lensed photographer Brett was spotted taking action shots as we entered Maryborough. After a very brief regroup we headed off on the final leg of the days ride. Over the Moolort Planes, turning off before Newstead heading to Daylesford via Yandoit, Franklinford and Hepburn Springs arriving in Daylesford at 4.00pm (as planned). H, Craig, Ash and George left the group here and returned to Melbourne.

After a beverage purchase the ride culminated at Musk. Gary and Michael had arrived and were erecting their tent. Michael Van D and doggie superstar Chloe Van Darrington arrived in the Man Patrol, Paul H and his canine companion LuLu arrived (yes, LuLu on the back of the Suzuki) and up went their tent. John H and Brett motored in and also prepared their nights abode. With tents up despite the gale force winds the bevvies were poured. Michael R and partner Stephen arrived with dog Harry and Darren B also came for the BBQ. My partner John got home from his days work to a house full of 17 men , 5 dogs and a paddock full of tents! I was sure I told him we were expecting guests…

The BBQ was cranked up and the snags, zucchini fritters (ala Michael R) and rissoles were cooked. Thanks to Gary and Michael who purchased the salads en route from Chewton. Evan and Rob made their way back to town after dinner and the rest of us settled back for a few more bevvies.

Sunday morning saw all tents still standing and after a few cups of tea and coffee we headed off to the Glenlyon Store (at 9.30am as planned) for a hearty breakfast and a few more coffees. Back at the ranch and after a showing of my new ride on mower the tents were raised, respective bikes and cars loaded and men and dogs made their own way back to Melbourne.

Thanks to all who came along….John and I had the best time again. Our canine friends behaved beautifully and settled down really well after a serious period of bum sniffing and ear licking. Most participated in the photo shoot although Chloe was exceptionally tired after a long day of navigating for David in the Man Patrol and couldn’t be woken to participate….bless.