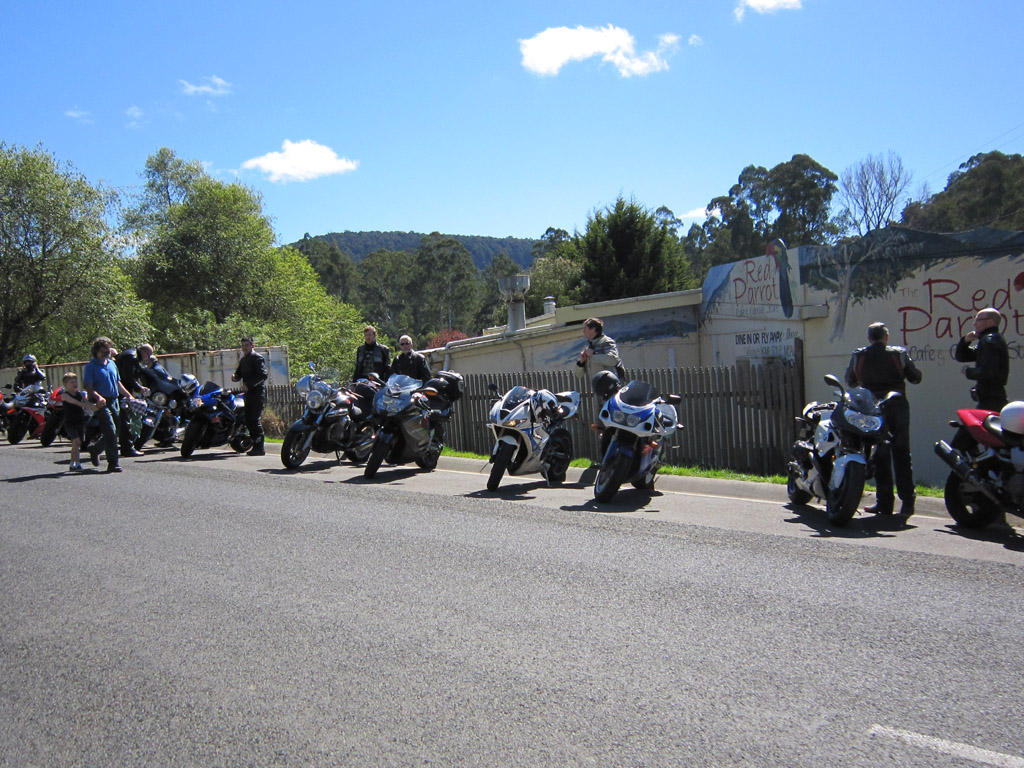 This ride report was originally published in the October 2011 issue of the Motorcycle Tourers club magazine, ‘Chain Lube’.

What a unique ride the September 18th club ride to Korumburra was. I decided to try something completely different as a break from tradition by setting off as the lead rider, have the tail rider split from the group and leap frog to the lead, have the lead rider chase down and overtake the leading tail rider. At the lunch stop I thought we’d try to get lunch finished while the recently leading tail rider waited for the trailing lead rider to catch up all the while the leading rider and group was enjoying a great lunch at Korumburra. Just for a change, for the afternoon ride we decided we’d all travel in the traditional manner by sticking together as a group.

This confusing ride started well with about 6 or 7 of us enjoying a coffee a South Yarra. A quick riders briefing and an explanation about the new ride rules and we were off to Lilydale. After an uneventful ride to Lilydale we caught up with a couple of extra members bring the total to around 9. Setting off on the boring part of the ride through the Yarra Valley, watching for speed cameras, radars and police cars (something I should have done earlier in the day as I got booked on the way from Cranbourne to South Yarra to begin the ride) we headed for morning tea at Noojee. After all the rides we’ve had recently that attracted rain, Evan couldn’t cope with a fine weather, blue skies, no wind and warmth, so he left the group to head back to Melbourne, but he was replaced by JC who was running just a little late at the start.

Things really got interesting from here. We headed off south to Warragul via some country back roads. Almost all of us managed to turn off the main road, but after a bit of miss communication the corner marker left before the rear rider passed by. This meant that Paul (and Viv the pillion) and Tim our tail rider missed the corner and continued on to Warragul via the main road, actually getting ahead of the group. It’s sad as they missed a really good ride through farm land and forests with no traffic and some really interesting riding. Arriving in Warragul for a fuel stop the now leading tail rider and Paul were nowhere to be seen and most of the others were waiting on corners for the missing tail rider to come through.

After some mobile calls we pieced it all together, worked out what Justin did and eventually regrouped, refuelled and headed for Korumburra for lunch. Unfortunately we messed up again and didn’t actually hook up with Tim and Paul, who stayed in Warragul waiting for us to pass by, we already had and were actually in Korumburra before Tim and Paul left Warragul. This time it wasn’t Justin’s fault, but we blamed him anyway. After lunch, as promised we visited the fabled Kongwak. Unfortunately for those not on the ride you didn’t get the chance to ride through Kongwak and I honestly believe that everyone should visit Kongwak at least once in their lifetime. Fortunately for those on the ride, and those that managed to keep with the group, we are totally enriched for having been to Kongwak. Anyway from Kongwak we found our way to the South Gippy highway at Grantville for the trip back to Tim and my new home at Cranbourne where Tim was home sorting out a BBQ as a kind of tourers house warming.

Overall, a great ride, a few adventures, a couple of missing riders, fantastic weather and brilliant roads. After an arvo tea for some, and a 2 hour search for missing keys (Paul misplaced his keys between the bike and front door) the early levers headed back to town while the others stayed on for an intimate Barbie (sorry that was Tim) BBQ I meant to say.