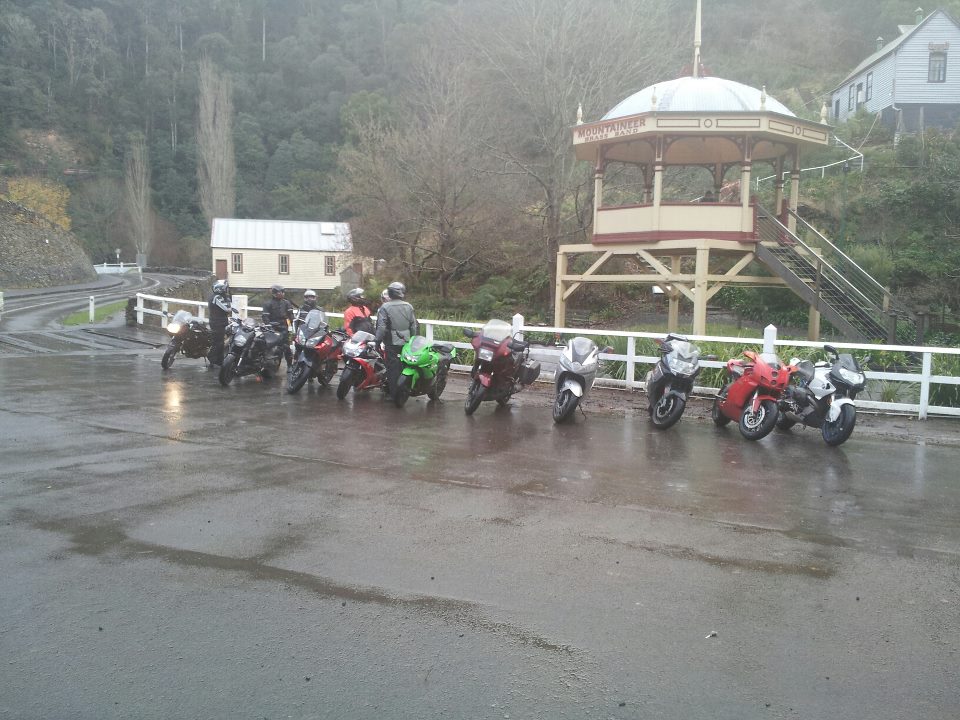 Been riding’… here’s the report

This ride report was originally published in the July 2012 issue of the Motorcycle Tourers club magazine, ‘Chain Lube’.

One of the interesting things about now living all the way out in Cranbourne is that you can really get into the monthly ride before the ride starts. This one was no exception. I was able to enjoy a very cool start to the ride and enjoy the 50 minute ride in nice dry weather to the South Yarra starting point.

I’m afraid that’s where the good weather deserted us!!! The ride to the second pick up at Lilydale was giving us a hint as to what the day would be like. The weather was starting to close in and there were a few sprinkles of rain. A quick group hug and riders briefing saw us rug up, jump into the full waterproofs and prepare to head off towards Noojee. The group of 14 intrepid riders included a couple of new faces. Paul and Steve were both new to the club and Jeff on his GSXR750 had been on a ride before and decided to search the web for a group of riders, found us and turned as he kept mentioning his wife at home!!!!

We headed off right on time and struck up a good pace. We had a lot of ground to cover to be at Walhalla for lunch so there weren’t any Latte stops planned along the way. The weather turned really serious from here and it began raining solidly all the way to Noojee. Nothing much to report on this part of the ride, oh, except for a serious debate between Paul and his Kawasaki GTR1000. It seems the argument was over whether to turn to the right of continue straight ahead. After a fair bit of pushing and pulling it would appear that the Kwaka won the argument and didn’t quite make the bend in the road, deciding to have a little bit of a lie down in the mud. After a bit more of an interchange Paul was able to right the Kwaka, dust off the mud and catch up to the group again. Paul has since decided to park the Kwaka and has joined the BMW family.

After the regroup if was off in the rain again to head to Moe via Hill End. Getting into the ride a bit now I had a bit of a change of plan and decided to head up the Mt Baw Baw to show the guys a few sites like the “apply chains here” turn around. A site not to be missed on any ride out that way. It actually wasn’t true that I missed the turn off and had to do a u-turn to get back on track that some have suggested!!!!

After the visit to the scenic chain spot we were off to Moe for fuel. It was here that David and Ken decided there was something more interesting to do back in Melbourne that involved dry clothes, a heater and no wet, slippery bends.

From here it was a quick sprint up to Erica and on to the very picturesque Walhalla for lunch at the local pub, open fire at no extra cost. We had a great lunch here and would recommend a return visit. It was over lunch that the talk turned to another one of our new members. Steve had one of the biggest and fattest rear ends that any of had ever seen. His Ducati Diavel must have had a 350 rear tyre!!!!! This was the talk of the ride as it was able to find any rock and stone within meters of its path and throw it in the direction of the nearest rider. Everyone who followed Steve made the same comment, “jeeze it was huge” and “what a fat…” Anyway a fantastic looking bike.

After lunch it was back into the rain again and head for home. A simple ride back to Moe and onto the freeway for the trip back to Melbourne. Thanks to everyone for coming along and getting down and dirty!!! Special thanks to Max who was rear rider the whole day.

← Paul’s ‘Macedonia’ ride ‘Take Flight’ ride →
Manage Cookie Consent
To provide the best experiences, we use technologies like cookies to store and/or access device information. Consenting to these technologies will allow us to process data such as browsing behavior or unique IDs on this site. Not consenting or withdrawing consent, may adversely affect certain features and functions.
Manage options Manage services Manage vendors Read more about these purposes
View preferences
{title} {title} {title}