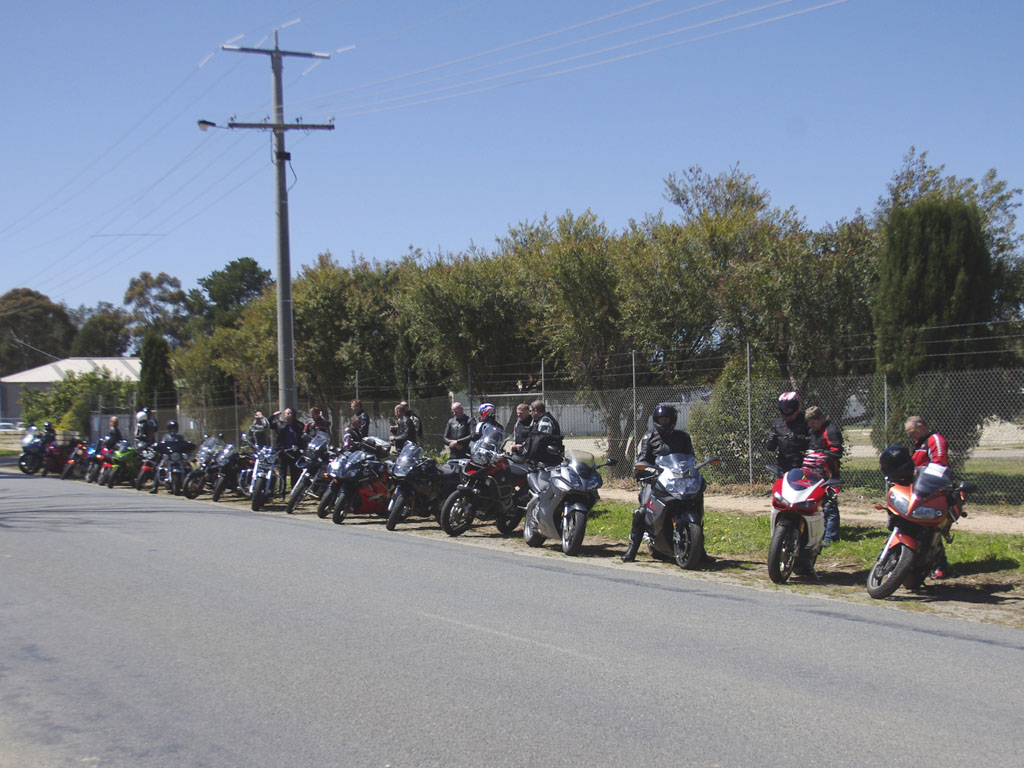 This ride report was originally published in the November 2012 issue of the Motorcycle Tourers club magazine, ‘Chain Lube’.

It was the perfect Spring morning for a ride. Low winds, no rain, a warm glowing sun transformed from former days almost forgotten, and Lycra Bound bodies in abundance… Ooops, Sorry, went off track for a moment there! But you must admit while collecting our gathering of riders, there was some rather nice toned bodies passing us by in the Triathlon competition. Unfortunately, for me at least, the time had come to roll my tongue back into my mouth, call the troops to fall in line, and depart this magnificent site.

Due to the events which seemed to have shut down any logical access arterial to the western areas of Melbourne, I decided to easiest and safest way to go through the tunnel and get onto the Tulla, so we needed to head back up the Yarra a few kilometers where we could cross, and migrate onto the Monash Tollway. Wasn’t too bad, but it did add a few extra kilometers and a little more travel time.

Upon arriving at the United Service Station in Whittlesea, it was indeed a magnificent site before me. 23 people in all had come along to frolic through some undiscovered roads. I am absolutely convinced the beautiful 22oC sunny Spring day had nothing to do with such a wonderful turnout? Now the pressure was really on me to make this ride work. I always doubt my selection of roads when planning a ride, whether it will be as exciting for others as I feel. Anyway, I am never offended if people decide to Part Company along the way if it isn’t up to their expectations. In fact, we weren’t certain whether we would be losing Craig J as his bike was losing power and coughing along. After a potential cause discussed, and about half a cup or so of Metho in the fuel, it was a case of “wait and see” on the next leg up through the hills.

A quick briefing before we saddled up, heading out North-East clipping King Lake West, then up thought Flowerdale towards Yea. As we would be heading up into the Highlands after departing Yea, climbing some lovely steep inclines, I felt it was safest to have everyone fill up their fuel before we headed off. Due to time constraints, I had mentioned there was no morning tea, so for those needing a top up as lunch would, as usual be somewhat late as we had a lot of kilometers to break through. Unfortunately, as would become apparently later from our very own HRH King Dewy, not everyone was within range of my sweet Dorset Tones!

Herding sheep? The thought never crossed my mind, but after calling for everyone to get on their bikes no less than 3 times, I figured the “Roar” to the “Thunderous” Rheem exhaust on my SV650S would send a clear message that I was now serious for a departure. Riding off, I noticed a flurry of activity as riders noticed I had left! Ha ha, must remember that for next time!

Just out of Yea, we veered right onto Ghin Ghin Road, then a few slight twists and turns over some lovely grassy low lands, with narrow one-lane bridges. Suddenly, we found ourselves facing skywards as we embarked a climb up into the Highland Region. Making such a rapid upward change was quite exhilarating, but wait, the climb then all of a sudden steepened… Could this get any better? Well, it could have if it continued for a lot longer than it did, but we now have plenty of twists through the windy highland country roads to enjoy.

A quick regroup at the Highlands Road turnoff, where John H went on alone to find a corner somewhere for some action shots of us swishing past. We made our way along some lovely little twists and turns and through little valley’s as we headed towards Seymour. Another regroup on the edge of town, before we jumped across to the Goulburn Valley Highway for a brief stint South.

A nice little right hand turn… Just for Paul S. after crossing the Goulburn River where we circum-navigated more mountainous terrain on one side, while contouring the river on the other along the Upper Goulburn Road. Once making it out into more open country, the scenery transformed from trees and brushes to open rolling grassy hills littered with giant granite boulders. An amazing transformation from that we had been riding through until we finally made it into the quaint little hamlet of Tallarook where we jumped on the Hume Freeway for another Southern dash down to Broadford, home of the State Motorcycle Sports Complex.

We made our way out of town via the backstreets online the Broadford-Sugar Loaf Creek Road. You wouldn’t even know it existed unless you stumbled onto it by accident… or your GPS told you to go that way!! My point is, you wouldn’t think to head out of town that way.

And just as we were getting settled in for some more lovely open country touring, with the odd twist and turn, this fool up front [Yours Truly] brashly pulled over on the side of the road… “What is it this time?” I imagine a few now rather hungry fellows whispered under their breath? Time for John H to position himself for more action shots as we suddenly dropped down and crossed in a U-Turn formation (This U-Turn could not be helped) over the Sugar Loaf River, then a very steep climb back out of the gully. A few more K’s along we intersected the Pyalong-Seymour Road, where we headed west, passing an old historical trestle rail bridge just before the town of Pyalong.

Another quick dash south along the Northern Highway where we engaged in another right-hand turn (for Paul S. naturally… Practice makes perfect right?) onto Lancefield-High Camp Road. As you are starting to get the impression, we were pretty much zigzagging out way across Victoria! I am sure no one had any idea of where we were, or where we were heading… even me, which you must admit, I did announce at the very beginning of the ride that I may just possibly be making it up as I went along… he he!

After a few more intersecting roads, we finally made it into Lancefield. It was this point that I realized, unless we fanged it along, we would be rather unfashionably late for lunch. I was also noticing the rumbling of people’s bellies was starting to exceed the roars of their exhausts. So, some fanging we did, and we made it about 15 minutes after our booked lunch time. There was a very relieved ‘Phew’ from me, and I am sure from the Publican at the Victoria Hotel in Woodend, as a group of 20 odd mouths if we didn’t show would have impacted on their profits as they would have put on extra staff for this late lunch sitting.

If anyone is around the Woodend area and wants to go somewhere for lunch, I would highly recommend the Victoria Hotel, as both times we have been there for lunch, they have been very friendly, and the meals are quite nice at a reasonable price. Especially on a cold winters day as they have a large open fireplace to keep you toasty warm.

After many laughs, a few drinks, and… Oh Yes, the discovery that Craig J’s motorbike issues was symptomatic of nothing more than his wet weather gear under his seat suffocating the air intake. Ran like a dream once his bike could breath again, but the Metho helps keep everything nice and dry anyway!

With lunch now satisfying the hungriest of riders, some members headed off on their merry way, while the rest of us soldiered on for the final legs of the ride.

After refuelling at the Woodend BP (now don’t the towns folk just love it when a biker group stops for some petrol!!), we headed out of town on the Tylden-Woodend Road, where we did a slight diversion north, naturally!! to enjoy a few more of those squiggly lines I discovered on the Google Maps. Almost overshooting the turn off, and becoming a motorbike ‘hood ornament’ on Paul S’s bike as I was unaware he was so close behind me, we managed to get back on track… Not quite a U-Turn!

We ventured across the very scenic and picturesque plateau above the Lauriston Reservoir before making the crossing at the dam wall of the Upper Coliban Reservoir, then a more subtle climb up to Spring Hill. Some final tall forrest roads as we made our final route through some many trekked roads we have all become quite familiar with from Glenlyon via Trentham and Blackwood before Greendale at the foot of the mountain range.

We pulled over just off the entrance of the Western Freeway, where I officially ended the ride, as it was now just past 5pm, and the cafe’s and bakeries would now be closed in Bacchus Marsh. So, after a lot of praise from the remaining riders, I acknowledged their appreciation, before we finally parted company and made our ways home for some well deserved rest.

Aspects of this ride route was originally created a few years back, to pad out the ChillOut Ride in Daylesford. I decided after the pre rides then, that this had some pretty exciting roads, so filed it for another time that I would be roped… I mean asked into leading a ride. Additional sections were the Highlands and returning via Trentham and Blackwood, as the original ride was planned in the opposite direction.

Thanks to everyone who joined us on the day, and I am very pleased that you all enjoyed yourselves, as I thoroughly enjoyed planning it for you.

← ‘Take Flight’ ride Gary leads MMT to Maryborough →
Manage Cookie Consent
To provide the best experiences, we use technologies like cookies to store and/or access device information. Consenting to these technologies will allow us to process data such as browsing behavior or unique IDs on this site. Not consenting or withdrawing consent, may adversely affect certain features and functions.
Manage options Manage services Manage vendors Read more about these purposes
View preferences
{title} {title} {title}