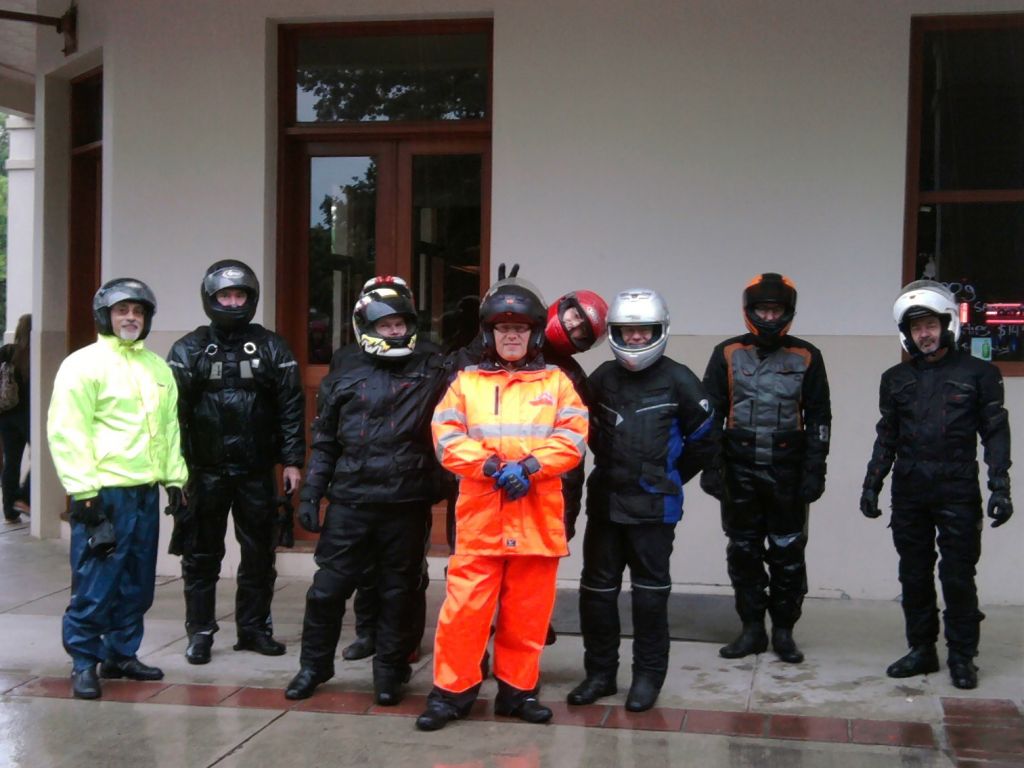 This ride report was originally published in the December 2011 issue of the Motorcycle Tourers club magazine, ‘Chain Lube’.

After checking the weather report every 5 minutes for 5 days before we left, I kept hoping it was going to be wrong. I arrived at the South Yarra pickup in light drizzle. “If this keeps up I can deal with it” I thought to myself. Unfortunately that was as good as the weather was to be for the entire Saturday.

The ride to 2nd pick up at Hallam with David P, Rolf, Moff, Gary, Darren B, Christian, Phil Brett & John was wet, but that was only the beginning. No-one could have seen what was coming(perhaps heard it though). We met Trevor, H & Tim at Hallam and that’s when the rain started. A quick check of the BOM radar and things were not looking good. Due to the twisty nature of the planned route, I decided a more direct ride with less bends and probably less debris was in order. I bypassed the planned roads through Gembrook and Launching place, instead taking a shorter and more direct option via Yelingbo and Woori Yallock.

A quick stop for fuel and a leg stretch at Healesville and we were on our way again, heading up though Toolangi, Yea and on to Alexandra for lunch. The next part of the ride we experienced rain like I have never ridden in before. Certainly the most treacherous conditions I have ever been in on the bike. At one point I’m sure the Daytona was about a foot under water. The Coles plastic bags I put in my boots worked a treat thankfully.

For lunch I had planned to eat at The Dairy Café. I had been trying to contact them for over a week to let them know 15 soggy motorcyclists would be heading in for lunch but was not able to get through. Upon arriving we found out why. A sign on the gate saying they were taking a short break and would reopen soon. DOH! Luckily a short walk across the road, there was a pub with plenty of room to accommodate hungry mouths. Michael had driven up in the warmth and dryness of the Range Rover to join us for lunch. The food was great as well as the service. Not to mention the choice of about 15 different types of parma’s on the menu.

Adam T and partner John were due to join us for lunch, but with the amount of rain and traffic, it was slow going getting out of Melbourne so they headed straight up to the mountain to get the accommodation warmed up for us. Lunch was stretched out to allow people to dry out a little. Not that it was much use to me, as very early in to the ride I discovered that my water proof jacket was no longer water proof, and my water proof gloves also were not the best at keeping the water out.

The ride after lunch was not much better in terms of weather. A quick stop in Mansfield to expel some fluids and we were on our way again. Due to the less than adequate tread on the Daytona’s tyres, heading up the mounting I was taking it rather slowly. David P, Rolf and Darren B headed passed me to enjoy the bends at their pace. Brett was next in line. I kicked the leg out to indicate he could safely pass but he sat behind me. At the top of the mountain it was clear that Brett was waiting to see if I fell off the edge, that way he would know when to avoid the rivers of water flowing down the road.

At the accommodation we all got undressed and… oops, that’s a different story. Riding gear in the drying room (it has also been decided that all future accommodation for overnight rides should have a drying room) and we headed inside to dry out.

Next order of business was a trip to the bottle shop and supermarket for some critical supplies. Mt Buller web site said supermarket was open until 5pm so at 4pm we should have had plenty of time. Obviously due to lack of business they were closed, as was almost every restaurant and pub on the mountain, including one that was supposed to be open but the chef got sick. A couple of phone calls later, a suitable dinner venue was found (1 of only 2 open on the mountain). Phew… I tried to make out it was well planned, but I don’t think anyone bought it. Dinner and drinks in the pub turned out to be an excellent night.

After dinner we started a game of “The Logo Game” which quickly turned in to Tim asking questions and everyone shouting answers across the room. Fun for the whole family.

I’m not quite sure what prompted it, but part way through the game David revealed a disturbing childhood story about him, a friend named Duncan and some mysteriously disappearing berries. Look out for the expose in the next issue of Chain Lube.

Sunday morning was a casual affair with people rising from the early hours through until about 9.30 when they smelt breakfast. Trevor and co did a great job cooking up a storm. I cooked last Mt Buller trip, so this time I happily sat back until someone else took the reins.

After breakfast a few of us decided a walk up to the summit was a good idea. Less than half way up half the group decided it was less than a good idea as it was bloody cold, blowing wind and fog as thick as pea soup half way up the summit. The brave ones continued on. I piked out and headed back to the warmth of the accommodation along with a couple of others.

We all packed up, checked bikes for water damage (Were we expecting Ducati or Triumph issue??). A quick group photo and we were off. Finally some dry roads and we got to have a play on the bends down the mountain. Alas, it was the Triumph to have a problem. Part way down the mountain the Daytona started coughing and spluttering. It felt and sounded like it was running on 2 cylinders (unfortunately it didn’t sound like a Ducati twin). A stop in Mansfield for fuel revealed the problem. As I opened the fuel tank an amount of water around the seal suddenly rushed in to the tank. I suspect the seal was not doing its job and let water in to the tank with the heavy rain we had during the night.

The original plan was to ride through to Flowerdale for lunch, but as I was not completely convinced water was the only issue, and knowing my previous Triumph’s history with electrical problems, I made the decision to cut the ride home short. We had a relaxed lunch in Mansfield and headed on our way.

Rolf headed the opposite direction starting a trip up north to Queensland. Darren B, Trevor and myself headed down the Melba through Yea. We were to be followed by H and Tim, but Tim (not sure who he was supposed to follow) took a slight detour and started following David back to Marysville. H quickly followed to correct Tim’s error.

With the Triumph seemly going ok, Darren, Trevor and took a left turn down through Toolangi and in to Healesville, a great little piece of road, one of my favourites. I bid farewell to Darren and Trevor as the stopped to fill up one tank and empty another.

Big thanks to Adam T for arranging the accommodation, John E (Adam’s partner) for bringing up the food, a few other supplies and his charming company. Thanks to all who came. I had a great weekend. I hope you all did too.