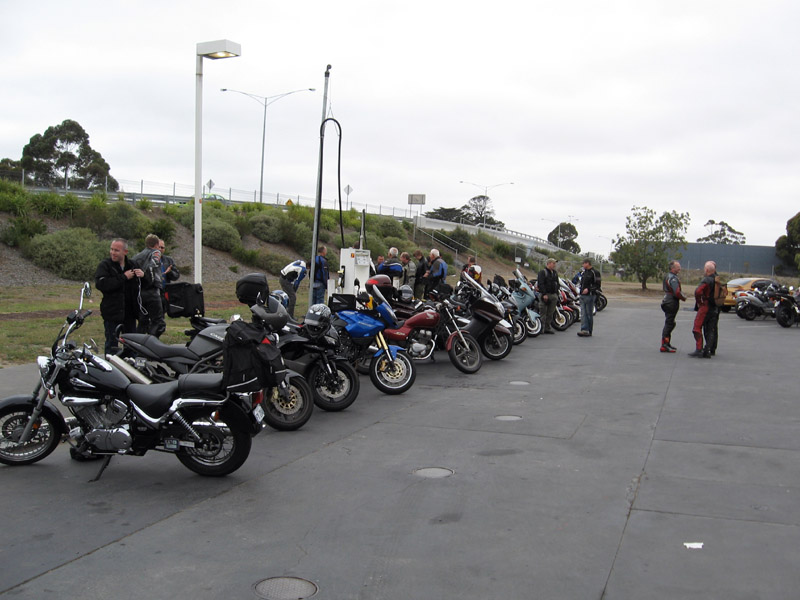 This ride report was originally published in the February 2009 issue of the Motorcycle Tourers club magazine, ‘Chain Lube’.

Some of you may recall my first time as Ride Leader. It was on 2008’s shortest day and the cold and crappy weather was not totally unexpected. But when I saw unbroken low cloud on what should have been a sunny summer’s day I began to believe John and Brett’s assertion that I might indeed be a Rain God to rival Dewy.

As the day progressed I was able to dismiss that thought and relax into what was proving to be a damn nice day to be out with old and new friends.

I had been met at South Yarra by Adam M., Byron and Jamie, Darren B., David P. (who has finally seen sense and upgraded to a Suzuki), David W., Dee, Fab, Hosko, Jonas and Scott, Michael V. and Peter Ha.

Thus the Ride Proper began with 22 traditional motorcycles and 5 maxi scooters. I will make no cheap and uncalled-for remarks about these statistics, except to say that Byron must be feeling far less ‘marginalised’ than he did in 2005.

We toured from Sunbury through Riddells Creek, New Gisborne, Barringo and over and around Mt. Macedon. It was here that Brett’s faithful Kwaka 250 suffered not an “Oops” but more of a “D’oh” – a terminally stuffed drive chain.

I am sure that Brett will supply a separate report on his experience!

After regrouping, and with Brett now riding pillion with Adam H., we continued on to Carlsruhe and the outskirts of Kyneton. Here we left the well-travelled ‘C’ roads and headed east along open, undulating and mostly deserted roads to Pastoria, Sidonia and Glenhope.

At Glenhope we turned west to Barfold and Metcalfe, regrouping above the unopened section of the Calder freeway at Elphinstone before descending through Tunnel Hill to Chewton and our picnic lunch in Castlemaine’s Victory Park.

As our group was so large it seemed only right and natural that we take over the best spot in the park. The company was a good match for the weather – warm, sunny, comfortable and utterly delightful. I learned later from some of the locals that our group was much preferred to the previous day’s visit by members of the “Fourth Reich M/C Club”. I am not kidding.

After lunch it was time to retrace part of our route before heading south along the old Calder Highway to Taradale and Malmsbury. Here we turned right at the ‘Jesus House’ (yes it is as tacky as you’d think!) onto the Daylesford-Malmsbury Road before again taking to the twisty back roads around Lauriston Reservoir, through to Tylden, back roads again through Ashbourne and stopping for more refreshment at the Woodend Bakery.

At this stage my role as Ride Leader ended. We all hung around and talked bullshit (“No! Really?”) until 4.00pm when the main group headed back along the Freeway to the city, thus covering about 340 km – and I went back to Chewton.

Guys (that includes you Dee), thank you all for supporting my ride. I suspected that it would be a good turnout but by Sunbury I was truly amazed.

My thanks also to Hosko and Byron for riding Tail.

Finally, welcome to our seven guests. I hope we all see a lot more of you. By the end of the day I thought that you had seen the Tourers at our best.

But – on reflection – Nah! We are like this all the time!