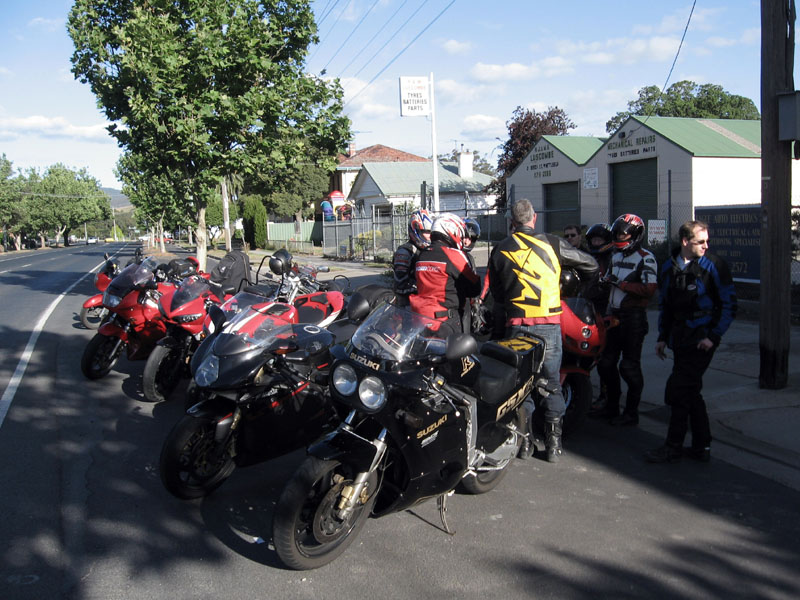 This ride report was originally published in the December 2008 issue of the Motorcycle Tourers club magazine, ‘Chain Lube’.

Was it to find every damn back road that Michael could not find on his Ruffy ride? He did not leave me many!

So the original plan was to Jamieson for lunch, but after getting close to it on my pre ride at 2pm and 300 klms, I thought a shorter roooot was a better idea.

We left South Yarra spot on 9.30am as discussed… sorry if anyone turned up at 9.31am…. I believe the first hic-up was at a roundabout 10 metres up from coffee…. a couple of riders mistook Fab’s indicator as an indicator. (he was actually just adjusting his hair style). Luckily the second pick up point was known as they soon found us there. About 14 riders started at this point… only a few spots of rain in our coffees here..

Off to Templestowe With a BIG SHELL SERVO and a BIG roundabout for the 2nd pick up… you know ..the one with now a dozen or so bikes parked….. opps Tim H must have had his IPOD on and shot past before i could return to the driveway to flag him down…. Enter here the Augusta as the chase bike…

Now numbering 17 we head to St. Andrews road that winds it way up to Kinglake for the next group gathering…. Luckily we did not have to re group for Mr. Plod at the top on the road due to the front riders having a nice car flash his lights at us…. The back group just was enjoying the easy roads anyway.

Time was an essence so I modified the run to go directly to morning tea at a olive grove cafe on the Ghin Ghin road a few klms up from the Yea Road…. a couple of nice boys have renovated the old homestead and made it a home/cafe… I notice Glenn had to get a Double caffeine shot as the latte looked a little milky…

Here the numbers swelled to 19 with Gary and John already tasting the local boys coffee….

Off up Ruffy road and onto Gobur with a stop at an intersection to view a new sign post showing various capital cities (a film crew doing a Coles advert I believe)… here Rolf decided that he preferred the current stretch of road and whilst he looked at my bike and me waving, he continued onto Yarck.. enter here Cagiva as chase bike… yeah sure! Luckily Rolf thought Yarck was not quite right and Michael found him.

Into Merton (200klms) for petrol. A quick stop here as lunch was on at Euroa at 2pm….

The next road was a nice twisty bit on the way to Euroa… A right turn to Strathbogie on some narrow scenic road just after the twisties and this led us into Euroa for a Pizza and Pasta lunch… well for most of us… enter here the Fireblade as the wombat chaser…. Unfortunately Kevin dropped his bike (see adz article) and after some other riders help limped into Euroa…. Thanks to Gary and Adz for picking up the pieces.

The lunch spot keep its kitchen open for us whilst the group caught up and we left for Yea around 4pm… The original plan was for a drop into Kinglake for a Bear picnic for afternoon tea and fairy cakes (read Peter C here) but we decided at 5pm Yea was the finish point… I will have to keep a couple of secret roads up my sleeve for next time….

Apart from the Incident, a good time had by all… We all hope Kevin recovers from the scratches and cuts.. both body and bike.

Thanks Adam for rear rider to Merton and John H for Euroa to Yea.

1/. Always have the ride leaders phone number in case of missing corner markers (carry the phone would also be good)

2/. Always stay on the corner mark till u are relieved (even at petrol stations… sorry Tim…)

3/. Always look out for waving bikies especially those who look like a lead rider.

4/. Always thank a motorist who flashes his lights…

5/. Never stop at a corner with an indicator on unless you intend to turn…

About 11km from filling with petroleum @ Merton about 13:50, Kevin came adrift on a blind corner & sailed off into the bush, down a good 15 foot of embankment.

I arrived as people were clambering down to assist & by the time I parked, threw on the old faithful hazard lights, it seemed that although the bike was pretty badly battered, Kevin was sore & a little bit bloodied on his nose.

It took 5 of us to push the bike back up onto the road as the embankment was extremely step & we needed to take a slightly longer path than the one taken by bike & rider to come down.

We had a bit of a group discussion as to whether the bike was roadworthy, NOT, & we decided to run a convoy with me continuing as “rear rider” with my hazards going to alert people of the fact that there was a reason to proceed slowly. For some people this was an excuse to gawk whilst not actually doing much braking….

We met up with H & a couple of others @ the next corner marking where it was suggested that Gary & I escort Kevin directly across to Euroa & we could try & sort getting some attention for the bike there.

The next 25 km were traveled @ about 50-60 km/hour with only one stop for Kevin to dismount & have a stretch on the side of the road to work some of the kinks out.

The three of us finally arrived in Euroa & fronted up to the local servo to organise things. @ this stage I rang & left a message with Hosko to explain where we were & what was happening, I got a call back from H saying that everyone else was up the road @ the café

The following led to much swearing & confusion:

Even with “Country wide coverage” from RACV, they didn’t want to know as it wasn’t a breakdown, but an accident.

Apparently we should have called emergency services from the word go.

We finally ended up using a local phone book from the very nice young man @ the servo & rang for a tow truck.

When this finally arrived, no straps for securing the bike & it seemed that the assessment would need to take place in Benalla, oh dear!!!

We ended up running another convoy with the tow truck driver leading the way, Kevin as pillion on Gary’s scooter & me still with hazards, following, so that we could park the bike @ his place until his boss arrived with correct straps for transporting the bike.

Gary & I then took Kevin up to the local hospital, which was only 3 blocks away. Gary then suggested that he stay with Kevin & that I catch up with the main group & fill them in on the details.

When I arrived it was to a group of well fed bikers & I let John know that Gary was @ the hospital & that maybe he wished to head off from there.

I had ordered some food, even though I didn’t think I could eat it & when it became obvious that I would be eating alone, Dee, Tim & Nigel said they would hang back & then travel down the Hume with me. Thanks people.

Soon Gary & John rejoined us for a quick coffee & to let us know that Kevin had been loaded into an ambulance to be taken to Shepparton Hospital for observation. Gee I thought he had suffered enough!!

I got to finally relax a bit before we headed off for the 150+ km run back down the “Fume”.

All I can say is that thankfully Kevin was in good leathers & by pure luck didn’t get more banged up than he did.

This whole thing is pretty long winded so will need to be hacked a bit if we aren’t to send it as a parcel on the next mail out of “Chainlube”.