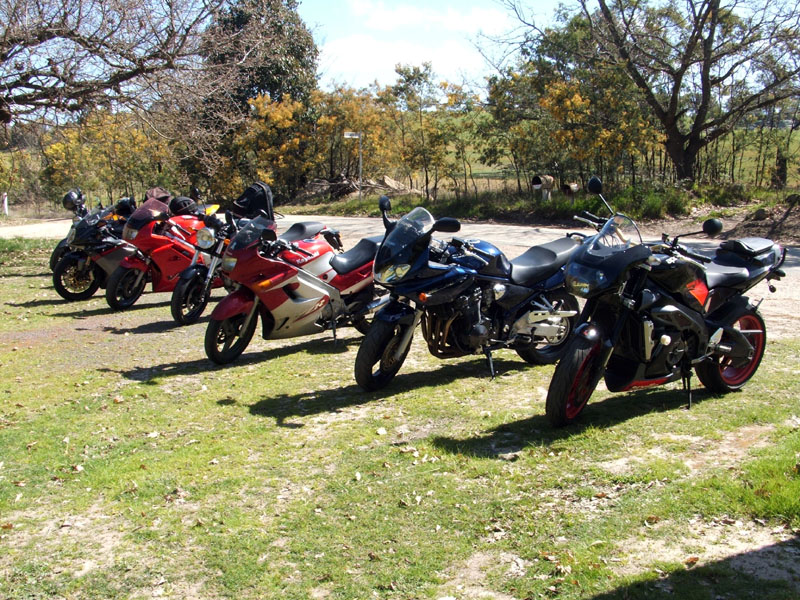 This ride report was originally published in the October 2008 issue of the Motorcycle Tourers club magazine, ‘Chain Lube’.

Melbourne had been buffeted by cold blustery winds and rain the week leading up to the club ride to beautiful Ruffy. What a fantastic transformation in weather greeted us as we all arrived at the meeting point for the club ride, sunny and a temp of 19C.

A total of 15 brave souls gathered to discover the fabled town of Ruffy located half way between the towns of Yarck and Euroa. I’d discovered these roads only by chance when some locals in Marysville suggested we go for lunch at the famous Ruffy Country Produce Store. The town only consists of a primary school, produce store and a handful of houses, and is at the end of the bitumen road. Oh but what a road.

I don’t think anyone in the bike club had ever been on these roads which where designed in heaven just for motorbikes. They were smooth, and free of traffic as they snaked their way through river valleys, and then twisted their way up a plateau past rows of wattle trees in bloom and pastures, bend after bend oh and on and on… Sorry if I’m getting a bit excited, I had better start from the beginning.

As I mentioned earlier 15 riders assembled at Lilydale and were surprised to see Dewy arrive on a different bike while his beautiful Ducati 1098 tricolor was in the shop having corrective surgery. A very exclusive model jointly funded by Suzuki and Ducati, the Ducati GSXR750. Could this be Casey Stoner’s new 2009 GP bike being developed and tested by Darren?

After a quick rider’s debrief off we started to Ruffy. We went up the Maroondah Hwy and through Healesville and the Black Spur to Acheron where we turned off on to the back road to Alexandra. This was also a road that I’m sure not many people had been on and was quite pretty as we followed the Goulburn River before climbing the ridge into Alex.

We stopped in town to top up our bikes with fuel then headed off again this time to the town of Yarck famous for its gourmet pies. At Yarck we turned off the highway to Ruffy, the sun was beaming as we passed rows of wattle and climbed our way up the mountain roads to lunch at the country produce store.

We finally pulled into the bustling metropolis of Ruffy and pulled up in front of the store where we were promptly seated at a long table in the gardens at the store and reveled in the sun enjoying good food, good company and good wine.

Soon it was time to head back to Melbourne and the roads back promised to be just as good as the ones we had been on earlier. Our journey saw us head via the towns of Terip Terip, Highlands and Ghin Ghin. The roads followed the ridgeline before plummeting down to the Goulburn river flats at Yea.

We regrouped at the highway where I discovered that the speedo on the mighty Cagiva had failed. I must have exceeded the speed and burnt out the speedo as I flew down the mountain. From the highway we headed of towards Seymour and turned off to Strath Creek and Flowerdale before heading to Whittlesea. Here we stopped at the local service station and fueled up and said our farewells as we all made our way back to Melbourne and home.

I hope that every one that came had a great time and enjoyed the brilliant roads around Ruffy. For those that couldn’t attend I would highly recommend that at least once in your riding life that you discover Ruffy and district.